GB U20 Women Start Euros with Victory Over Ireland - Hoopsfix.com

GB U20 Women Start Euros with Victory Over Ireland 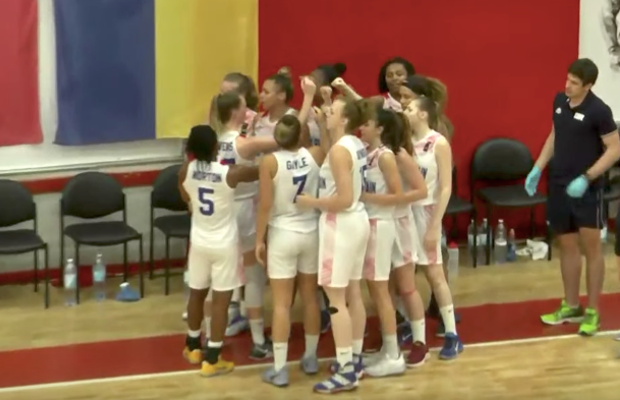 GB Under-20’s began their Division B campaign at the European Championships with a 69-46 victory over Ireland on Saturday in Eilat, Israel.

Chema Buceta’s side had been given a stern test in preparation for the event and were pushed all the way by their rivals in the tournament opener.

Millie Stevens top scored with a game-high 18 points and added seven rebounds, while Abigail Johnson was the only other player in double figures with 14 points.

GB U20s off to a winning start at #FIBAU20Europe Div B as they defeat Ireland 🇮🇪 69-46. @milliestevens with 18pts/7rbs. 🇬🇧🏀 pic.twitter.com/18vPL0NeaY

Imani Whittington and Stevens set the tone with early triples as GB opened up a 12-3 lead at the midpoint. The gap increased to 12 points at 19-7 by the end of the first, but the second was far from the same.

Ireland rallied with a dominant period as they turned things around, closing the half with a 7-0 run to lead 25-28 at the break.

GB re-grouped in the third to move back ahead as Molly Taylor and Georgia Gayle netting back-to-back scores from downtown before Stevens surged into double figures with an and-1.

Trailing 42-39, Ireland levelled with the opening score of the fourth, but GB hit straight back with a pivotal 10-0 run to take control.

Stevens led the charge as GB began to assert their dominance at both ends with Jess Davies scoring the final six points to complete a convincing win in Group B.

GB U20s return to action tomorrow as they face Romania in their second game at 4:15pm UK time.