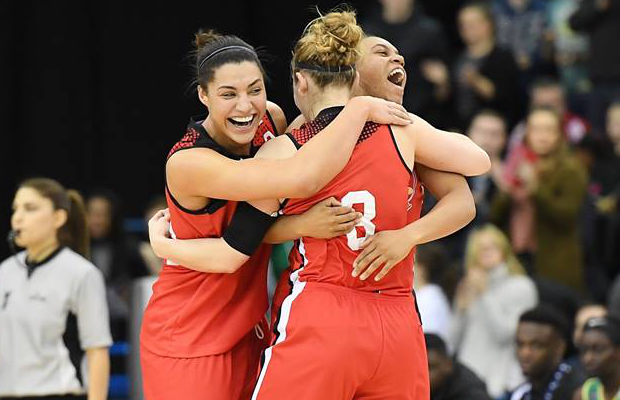 GB Senior internationals Georgia Jones, Savannah Wilkinson and Dominique Allen have been named to the WBBL All-British Team of the Year alongside Siobhan Prior and Steph Gandy.

The trio were part of GB’s squad for the recent EuroBasket 2017 qualifiers and were rewarded for impressive seasons for their respective clubs.

Jones and Allen teamed up to lead Manchester Mystics to a historic first piece of silverware as they claimed the WBBL Cup title at the Barclaycard Arena in Birmingham.

Experienced centre, Allen picked up the WBBL Player of the Month award in January and finished with averages of 9.1 points and 9.6 rebounds per game, while Jones put up 17.8 points, 5.1 rebounds and 6.8 assists.

Meanwhile, Wilkinson – who has committed to Florida State University – led Barking Abbey in scoring with 15.4 points per game as well as 7.6 rebounds and 0.9 blocks per outing having featured in all 18 league games.

“It is always an honour to be recognised by the league and to make the All-British team,” Wilkinson said, via the club website.

“With so many amazing British players playing in the WBBL is a great achievement for me. I want to thank the WBBL and everyone who’s part of the league for this recognition in my final season!”

Prior played a key role in helping Nottingham Wildcats defend their WBBL Championship title with 12.2 points per game, whilst being one of the league’s deadliest threats from 3-point range.

And, it was another strong season for Sheffield Hatters’ veteran leader with Gandy averaging 19 points per game along with 6 rebounds and 1.8 steals having also been recognised for her defensive efforts.