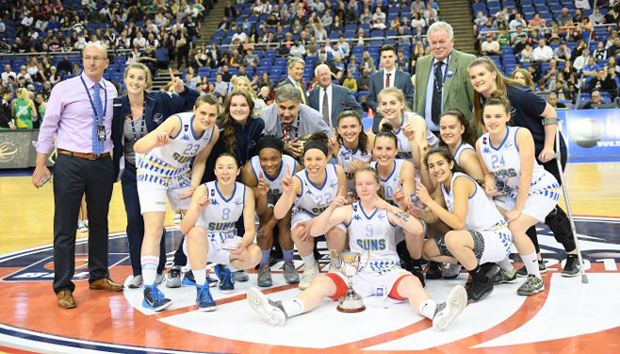 Sevenoaks Suns finished the season in the best way possible as they defeated Nottingham Wildcats 70-61 to be crowned Molten Play-Off winners at The O2.

Len Busch’s side were down 12 in the first half, but a dominant third period set the platform to complete a season double.

Cat Carr was hugely influential for the Suns and finished with 20 points, a Play-Off Final record 14 rebounds as well as six assists in the win.

Gabby Niktinaite had 15 points with Ta’Yani Clark adding 14 points with a big performance at both ends for her side.

“It’s been a magical season and this game summed it up.We started poorly, we talked about it and fixed it, playing some pretty good defence.

“We have a great group and it’s been a wonderful ride.”

It was the league MVP, Ashley Harris, who started brightly with five early points in a 9-4 start and Nottingham soon established a double-digit advantage.

Melisa Mendes made it an 11-point game at 25-14 before Clark hit straight back to end the opening period.

The Wildcats built their largest lead of the game at 30-18 on a three from Siobhan Prior, but the Suns responded with an 8-0 run to cut the gap.

Another triple from Prior ended the half with the Wildcats up six as she moved to 11 points, alongside Harris.

However, the turning point came in the third as the Suns stepped it up on defence; forcing multiple turnovers as they held their opponents to just two points in the quarter.

Clark put Suns ahead at 46-44 and they scored the final eight points on the period to lead 52-44.

Anne Pedersen made it a 10-point game with the first points of the fourth before the league champions hit back with a 7-0 run.

Carr came up huge back-to-back baskets before finding Pedersen inside as the Dane made it 63-51 and Sevenoaks were able to hold on to seal the win and start their celebrations.

Harris finished with 16 to lead Nottingham, with Ferreira adding 13.