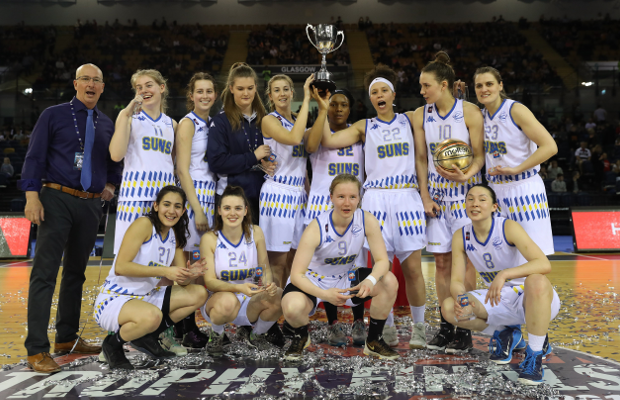 Sevenoaks Suns made history by beating Leicester Riders 82-67 to win the 2017 WBBL Trophy in a thrilling Final at the Emirates Arena.

The Suns turned on the style in the third quarter to pull away en route to securing their first piece of silverware in the WBBL.

The Riders made a strong start with Alex Smith netting a triple in the middle of an 11-4 opening in the first three minutes.

However, the Suns answered and took their first lead on the back of a 9-0 run as part of a fast-paced opening to the Final with 47 points put up in the first 10 minutes.

Harriet Swindells tied the game at 25 early in the second but the Suns moved into an eight point lead.

The Riders found success in the paint through Erika Livermore with the American racing along to 18 points at the half on 7-of-8 shooting with her side down three at the interval.

Carr began to impose herself on the game in the third with 11 points in the period as the Suns produced a pivotal quarter with a 12-0 run helping to establish a 54-68 advantage.

Leicester continued to fight in the fourth but were unable to claw back the deficit as Sevenoaks kept their composure to close out the historic victory.

Carr proudly held the trophy aloft as the Suns write their name in the history books.