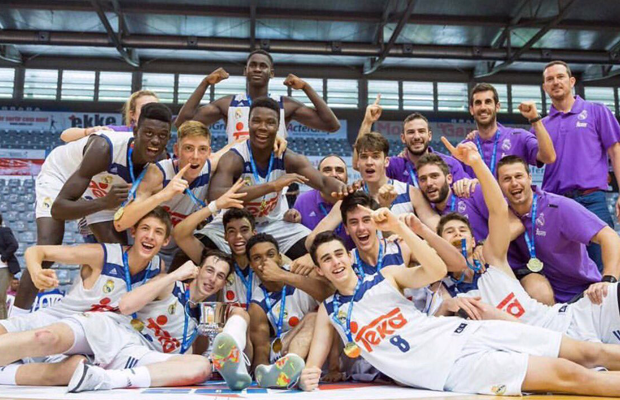 Kareem Queeley has added the latest honour to his resumé after finishing the season undefeated to win the Under-16 Spanish National Championship with a 98-95 victory over FC Barcelona in the final on Saturday in Spain.

Queeley finished with 10 points, 9 rebounds, 3 assists and 1 steal on 3/5 shooting in the final, and came up huge down the stretch; scoring the go ahead three-point play in the final minute, before drawing a charge with 20 seconds left to seal the result.

The 2001 born England Under-16, who made the Jordan Brand Classic International Game in March, also added this impressive finish on the break:

Queeley battled an outbreak of food poisoning that spread through the team at the tournament, being hospitalised and missing a pair of games before returning for the quarter finals. His best outing was a 22 point, 7 rebound effort just before heading into the knockout stages.

Queeley signed with Real Madrid in September of 2015, and won the Under-16 Regional Championship in his first season, before being knocked out in the last 16 of the nationals.

This year, his squad finished up 90-0, competing in the domestic league as well as tournaments in Tenerife, Hungary, Montenegro, Italy and Valladolid in Spain.

Queeley has been named in the initial GB Under-16 squad for this summer’s European Championships.

You can watch back the final here, and check out the box score here.