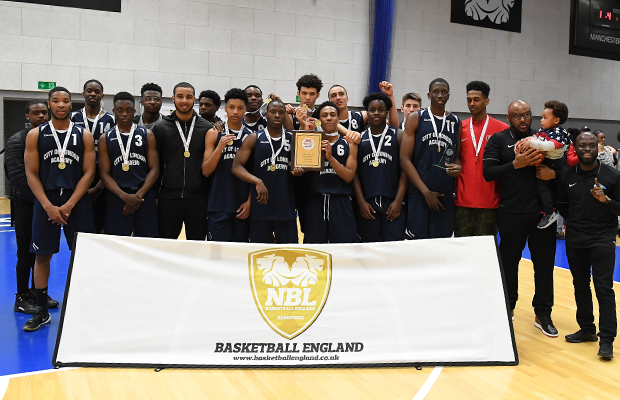 Southwark Pride defended their Under-18 National title with a 49-47 win over Allerton High Force Academy in the Final on Sunday at the National Basketball Performance Centre in Manchester.

Jonathan Komagum picked up MVP for his 10 point, 15 rebound outing, but it was James Mitchell who left his mark – following up his dominant semi-final performance with 14 points and 10 rebounds plus the two game winning free throws in the dying seconds.

“What a weekend and what an achievement for the club and these boys,” said Sterling Muschett.

“It’s always a privilege playing at Final Fours, let alone coming up to Manchester defending a title, and winning was that bit special.

“Derby set the tone with the level of toughness they played against us and did an excellent job executing their game plan.

“Leeds went at us from the first minute all the way to the last and if we didn’t control the glass the way in which we did, the game would have been different.

“Having such a small club do the double-double is amazing.”

Thai Segwai-Lodge stuffed the statsheet with 14 points, 5 rebounds, 5 assists and 4 steals, whilst Allerton were led by 20 points from Jaka Pandza; the only player who reached double figures.

Derby’s Callum Singleton went 10 of 19 from the floor for 30 points, whilst Kaiyem Cleary had a 27 point, 11 rebound double double on 11/18 shooting for Manchester.

Leighton Elliott-Sewell had 17 points, 5 rebounds and 6 assists, with Myles Alexander having 14 points, 7 rebounds and 7 assists for Derby.

Despite the game featuring multiple lead changes, Allerton led the entire fourth quarter, spurning every Manchester advance, as the Magic couldn’t get it closer than two points.

“It’s a great achievement and I’ve got to give mad respect to the guys – they were excellent today,” commented Allerton Assistant Coach Chris Savage.

“They put in a really tough performance and it’s going to require another one tomorrow (Sunday), but these guys are hungry – and ready – for it.

“Southwark Pride are a very athletic and physically aggressive team, so we’ve just got to come out with the same mindset of tough defence and smart offence.

“We’ll run our system and our plays and, hopefully, we can get the W tomorrow (Sunday).”

Kaiyem Cleary led Manchester with 20 points and 11 rebounds, Wesley Oba had 10 points, with Arinze Emeka-Anyakwo finished with 10 rebounds to go with 9 points.

Mitchell went 10 of 15 from the floor, as he helped Pride bounce back from a three point opening period to dominated the second quarter and regain control of the contest.

As Pride led by 7 with with 1:32 to play, Derby launched a furious last gasp comeback attempt, pulling to within 3 after a Charlie Woodyatt three with 37 seconds remaining but that was as close as they would get. Derby’s Sam Coles would knock down a triple with two seconds remaining for the final result.

Gedi Juozapaitis was the only other player in double figures for Pride with 12 points, Mayowa Mohammed had 7 assists with his 8 points off the bench, and Jonathan Komagum grabbed 10 rebounds.