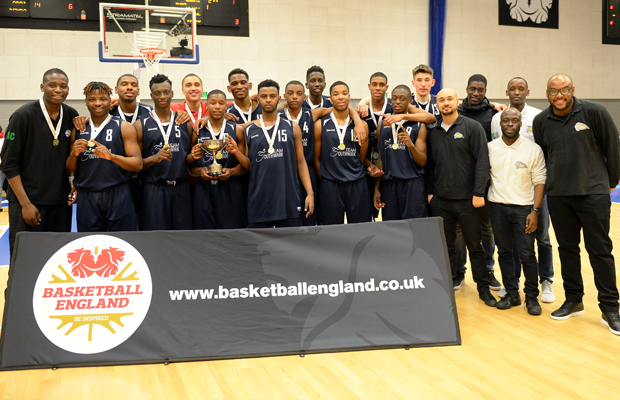 Peckham Pride put the icing on a perfect season with an 86-39 rout of Reading Rockets to claim the Under-18 National Championship on Sunday at the National Basketball Performance Centre in Manchester.

Peckham jumped on Reading early, extending their lead to 20 in the second quarter with the game being decided by halftime as the Pride added the U18 National Championship to their National Cup title and undefeated record all season.

Shaquille Walters, who finished with 11 points, 6 rebounds and 7 assists, and Gedi Juozapaitis, who hit six threes on his way to 18 points, were named co-MVPs, as every player on Peckham’s roster got on the scoresheet.

“The journey for half the team is over and ended in fairytale fashion,” said Peckham Head Coach Sterling Muschett.

“It was a total team effort that was the ethos for the season. Being happy for these boys and the program is an understatement and I can exhale and finally say we did it.

“To have co-MVPs was a fitting end for Shaquille and a testament to how Gedi has developed this season; both excellent young men. Fourteen brilliant boys who ended a perfect season perfectly.”

Having barely escaped Birmingham in their semi-final as they struggled with their shooting (5/26 from beyond the arc), Peckham bounced back in spectacular fashion, going 13/29 from three point range as they never allowed Reading into the game.

“This season has been tough but with 14 MVP’s we got there in the end and got the job done,” Walters said.

“I can honestly say it was the perfect finish. Bringing out all my Peckham Pride memories over the years, this journey is one like no other, it just can’t be replaced. The Pride will be with me forever, wherever basketball takes me.”

Reading’s Ganesh Bikram Rana was their only player in double figures with 10 points, while Fidel Lopez had 12 rebounds as he battled foul trouble throughout.

Reading were in control throughout the contest, though a Magic fightback that saw them get within 12 with 8 minutes left was extinguished when leading scorer Kaiyem Cleary, who finished with 14 points, suffered a head injury which saw an ambulance being called and the game being stopped for half an hour (he is ok).

On resuming the game – without Cleary – Manchester had little resistance as Reading cruised to their playoff final spot.

The Berkshire side were led by 23 points from Jay Carter, and 22 Ali Sbai – 14 of which came in the first half.

The last time Reading Rockets made the U18 Final was in 2010, where they lost to an incredibly strong Westminster Warriors side.

With Peckham holding onto a three point lead, a foul was called on a Shaquille Walters block attempt on Keanen William’s three pointer with 1.5 seconds left. Williams missed the second free throw, before internationally missing the third; and though Birmingham got the offensive rebound, they were unable to convert at the buzzer.

Peckham have now gone a step further than last year, where they lost their semi-final in OT to eventual champions Greenhouse Pioneers and look to put the icing on the cake on Sunday.

The reigning U18 National Cup champions enjoyed a game high 20 points from Shaquille Walters, plus 11 from Thai Segwai-Lodge, while Birmingham were led by 16 points and 10 rebounds from Keanen Williams, and 14 points and 13 rebounds from Kudakwashe Mubaiwa.