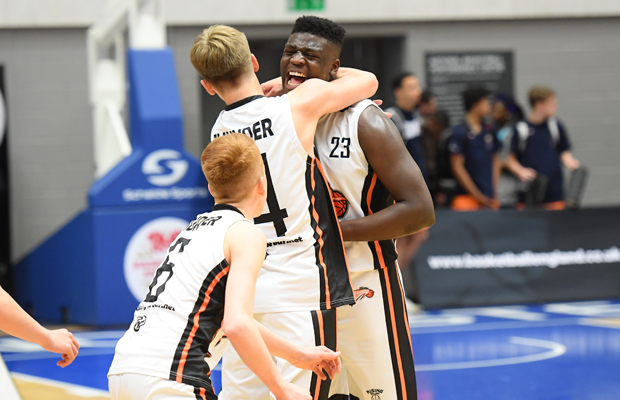 Worthing Thunder claimed the Under-16 National Title with an 80-68 win over Haringey Hawks in the final on Sunday after the National Basketball Performance Centre in Manchester.

With just two points separating the sides heading into the final period, Thunder reeled off a 21-12 run over the last six minutes to claim the win.

“It was a fantastic day for our junior programme,” Head Coach Daniel Hildreth told Hoopsfix. “Two national championships in the same day.

“It was a total team effort evident in fact that we have 5 guys in double figures. Hosana was fully deserving of his MVP. He is instrumental to everything we do both ends of the floor. He had 6 blocks and was a beast on the boards again, add to that a solid 15 points and an energy that is second to none you have a winning recipe.

“These boys were told on day one that I believe we could win a National Championship, they proved me right. We have such passion and a truly respectful group of young men. The support not only from family and friends was immense throughout the final and we were all grateful for that support. It was a proud moment for all involved and a weekend we will cherish forever.”

Adelaja Ogidan had 17 points and 15 rebounds to lead Newham, with Alexander Distras having 16 points and Franklin Agu adding 11 points and 11 rebounds.

Semi Final 1
London Greenhouse Pioneers vs Haringey Hawks
Haringey Hawks advanced to the U16 final with a 69-77 win over London Pioneers.

Haringey were led by 27 points, 10 rebounds and 6 steals from U16 Cup MVP Spyridon Kapsalos, with 17 points from Andreas Vella, and 14 points, 16 rebounds and 5 assists from Mohammed Sanni-Oba.

“It feels great to be in the final, but we made that game harder than it should have been,” stated Haringey Hawks Head Coach Franck Batimba.

“We started off slowly. They were a lot hungrier than us at the start and their full court press got them so many turnovers.

“But, we stayed composed and had built up a nice lead by the fourth quarter, when we started to get comfortable and take stupid shots. We made that game hard, but they are a good team.

“Getting to the final doesn’t mean you’ve won. If you finish second, you’re the best loser and we haven’t come this far to lose. We have to win. We’ve worked too hard not to.”

B Kabpoza had 21 points, 8 rebounds and 8 steals to lead Pioneers, as their registered 25 steals were not enough to overcome 35 turnovers.

“It was a tough defensive game from the start,” Worthing Head Coach Daniel Hildreth commented.

“Having lost twice in the league to Youngbloods we knew what we had to do. We coped well enough with the the pressure and managed to weather the storm and reach the final. I’m so proud of the guys level of commitment and they truly deserve this great experience.

Looking ahead to the final match up against Haringey on Sunday he added:

“We have had 3 great games with Haringey already this season and I would expect nothing less in the biggest game of the year. This is what all the blood sweat and tears is for, the coaching staff, parents and players are fully deserving to be here in the NBPC and I hope that the boys can do themselves justice finishing the season with a win. The event has already been fantastically run and I just can’t wait to get out there tomorrow.”

Hosana Kitenge stuffed the statsheet with 13 points, 19 rebounds, 3 steals and 3 blocks, whilst Blaize Sagna led Thunder in scoring with 16 points.

Alexander Distras and Adelaja Ogidan led Newham with 9 points each.