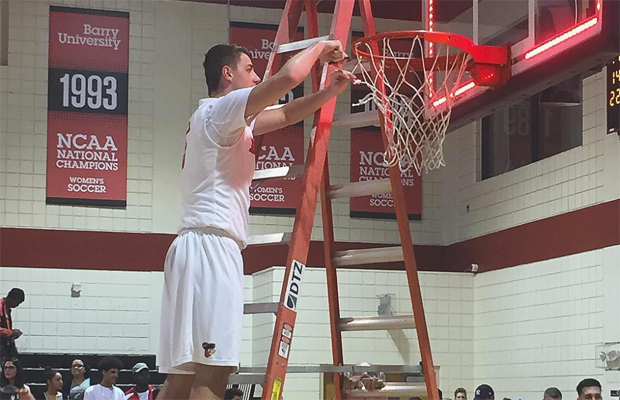 The Buccaneers went 21-5 on the season including 13-5 in the SSC and now head into the post-season as the Number 1 seed in the Conference Tournament.

“Winning this year’s regular season title has been such a fun ride with my team-mates and to finish our regular season with the chip is a testament to our hard work,” Walshe told Hoopsfix.

“We all came to Barry for one reason and that was to win, winning the regular season made history at Barry for the first time to win an outright title and that is just one step towards are ultimate goal – we aren’t done yet.”

Walshe played in 20 games with a career-high of 11 points coming against Xavier at the end of December.

The freshman guard finishes the regular season having registered an average of 2 points, 1.2 rebounds and 0.8 assists in 7.3 minutes per game in his first year with the Bucs.

“This year has had a lot of ups and downs; adjusting to the lifestyle and systems has been challenge at times,” admitted Walshe, a HASC alumni.

“But I wouldn’t have changed any of it. I’ve loved my time as a freshman competing for minutes and proving that I can compete with the best in our league.

“I’ve established a good ground that I can work on and compete for a starting spot next year.

“All in all it’s been amazing and I can’t wait for my next 3 years.”

Barry take on Florida Tech in the SSC Tournament quarter-finals as they look to make it to the NCAA DII Championship.