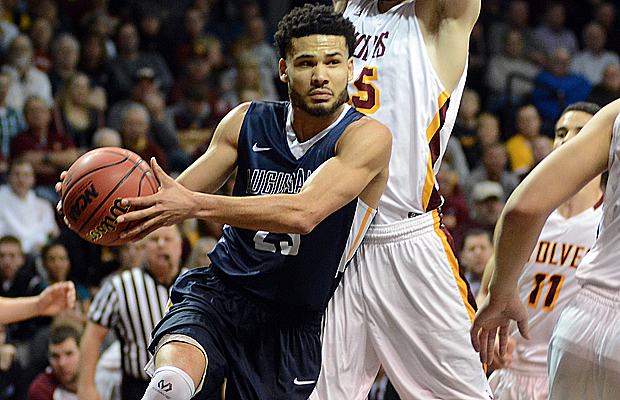 Jordan Spencer has earned All-First Team honours after an impressive season was recognised by the Northern Sun Intercollegiate Conference.

The junior guard has averaged 16.1 points, 3.7 rebounds and 7.4 assists per game in 29 appearances so far this season.

Spencer is closing in on 500 points for the season having netted a career-high of 39 points against Southwest Minnesota State.

The former GB under-20 guard also has career-highs in field goal percentage, 3-pointers made and steals.

Spencer was previously named to the All-NSIC Second Team in both his first two years having also been named NSIC Freshman of the Year in 2014-15.

As per release, Spencer is one of just six active players in NCAA basketball (Division I, II or III) with 1,000-plus career points and 600-plus assists and is just 15 assists away from becoming Augustana’s all-time leader.

The Vikings closed the regular season with five straight wins to finish 16-6 in the NSIC and have made it through to the semi-finals of the post-season.

.@JC_SpencerUK went for 23p, 6r, 7a in @AugieMensBball's 88-64 win vs Northern St. to advance to NSIC semis. Play no.1 seed tonight pic.twitter.com/YtB5OlbAcS