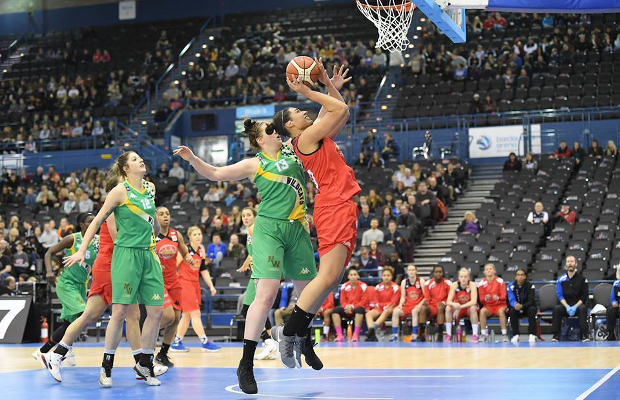 Dominique Allen is one of very few players who can proudly say they’ve represented GB at an Olympics. And now, the 27-year-old is creating more history with Manchester Mystics in the WBBL.

Allen made the switch in the summer as part of a new-look team with veteran play-caller Jeff Jones taking charge and assembling a roster filled with a strong British core.

“I didn’t really know what to expect coming in, but it’s been really good so far,” Allen explained to Hoopsfix.

“I didn’t start the season in the best of shape as I wasn’t planning on playing over here this season.

“Georgia [Jones] and Jeff [Jones] both convinced me to join and I’m really glad they did.

“It was a bit of an adjustment early on and trying to just find my place.

“My mentality had to change as Jeff needed more points from me, whereas overseas I had been more of a defensive player.”

The move to Manchester re-united Allen with long-time team-mate, Georgia Jones, having spent four years together at Oral Roberts University in Tulsa, Oklahoma.

The duo’s strong bond off the court translates into a special connection on the court which has been demonstrated on numerous occasions this season.

“We played together in college as well as for GB and she’s the best point guard I’ve ever played with.

“She knows me better than anyone and that’s really helped us this season.”

Allen has continued to get better and better as the season has progressed, epitomised by her recent Player of the Month award for January.

It was a month that saw her named MVP in her side’s historic WBBL Cup title success after registering 21 points and 11 rebounds in a 71-60 triumph over Nottingham Wildcats at the Barclaycard Arena, in Birmingham.

“It was really special,” Allen enthused.

“We didn’t know how good we would be this year, so to get a trophy so early meant a lot to everyone.

“Getting MVP wasn’t expected at all – a few of us played really well that day.”

Back to her roots

The Final location made the experience even more memorable. Hailing from the West Midlands, Allen’s father, Clive Allen, an England and GB international also spent more than a decade in the BBL with Birmingham Bullets.

“It was great having friends and family there and it was my first time playing in the arena so felt good to get a win at home so to speak.”

Basketball has continued to run in the family with Dominique’s sister, Whitney, currently playing in her senior year at Edinboro University, in Pennsylvania.

However, Allen’s initial introduction to the sport didn’t quite go as planned.

“My first memory is from when I was about 5,” she recalls with a laugh.

“My dad tried to throw the ball to me, I stubbed my finger and was like ‘I’m never playing basketball’.

“It wasn’t until I was about 11/12 I started playing. I was really tall already then.

“I wasn’t forced into it – it seemed an obvious thing to do – and he’s always given me great advice.”

Allen is back on home soil and witnessing first-hand the rise of female talent coming through in the U.K.

The WBBL – now in its third year – has seen the level of play continue to grow with young players given their opportunity to showcase their potential.

The likes of Kyla Nelson and Savannah Wilkinson both shone in a recent clash live on BBC Sport, while Gabby Nikitinaite and Holly Winterburn are among other promising starlets who are attracting attention with their performances.

“They’re so good, it’s quite scary,” Allen said of the rising British talent in the WBBL.

“Kyla Nelson and Savannah Wilkinson have been really impressive and there are a lot of other players doing great things.

“The competition is so much better than when I left eight years ago.

“The level here is way higher and just shows now that you don’t only have to move to America.

She added: “It is great having a strong league and it would be good to have all the GB players in the league, but I know that’s not realistic right now.

“It is definitely something to aspire to, though, and hopefully this is the start of something.”

Allen was one of nine players in the WBBL that were called up to the initial GB Senior squad for their final round of EuroBasket 2017 qualifiers in November.

GB finished their campaign with a resounding victory over Albania, but a prior defeat to Italy had ended their hopes of playing in Prague/Hradec at this summer’s EuroBasket tournament.

It stopped a run of three consecutive European Championships for the Senior Women having competed in 2011, 2013 and 2015.

“We all expected to qualify,” admitted Allen. “It’s the first time I’ve been involved that we haven’t so it was really hard to take.

“We were really focused. We had nothing last summer and nothing this summer now and that’s frustrating but we are really motivated for next time and will be back stronger.”

Allen represented the England Under-18’s in back-to-back summers in 2006-07 before moving up to play with GB’s Under-20’s in consecutive European Championships the next two years.

The 6’3” centre had just finished her four years at college when a first call-up to the Senior team came just months before the 2012 London Olympics.

“I thought I had no hope of getting on the team,” Allen said of her expected chances.

Allen was the second youngest player on the team at 22, awaiting a first senior cap on arguably the biggest global sports stage of them all.

It was a historic tournament for both the men’s and women’s teams, and although the women finished without a win, it was an unforgettable experience.

“It was the best three weeks of my life,” Allen simply puts.

“I was really young – I had played with the Under-20’s, went to China with the University team in 2011 and then picked to go to camp after that.

“Those were some of the hardest practices ever and I was so excited to get picked.

“Obviously, it would have been great to get a win, but it was an unbelievable experience and I didn’t want to leave the village.”

There was little time for the experience to properly sink in as Allen was soon setting off to the North of Italy having signed her first professional contract with Bologna.

Ventures in France, Germany and Czech Republic followed but it was the whirlwind year of 2012 that stands out as Allen turned pro.

“Going from the college system straight to the Olympics and then straight into my first pro season in Italy where no-one spoke English was definitely a challenge – it was a pretty crazy year.

“My second year in Calais (France) was the highlight of my professional career as we won the league title and had a really good team.”

The opportunity to win another league title is on the horizon with the Mystics well placed with a 7-2 record so far.

Having secured the Cup title, there are still three more pieces of silverware up for grabs from now until the end-of-season showpiece at The O2 Arena.

“We have one trophy and of course want to add to that,” declared Allen.

“I want to do whatever it takes and just do what I need to do for the team.

“The top four or five teams are really strong and anybody can beat anybody.”

The Mystics have broken into the group of teams competing for top honours in the WBBL and something very special could be unfolding.