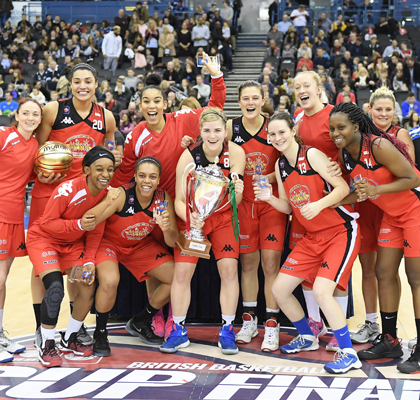 Manchester Mystics made history by claiming the first-ever WBBL Cup title after beating Nottingham Wildcats 71-60 at the Barclaycard Arena.

Rheanne Bailey top scored with 23 points and added 13 rebounds, while Dominique Allen claimed MVP honours with 21 points on 8-of-10 shooting along with 11 boards.

“I’m really shocked,” Allen said on being named MVP. “I think there were three or four of us who deserved it as we played really well and I could not have done it without my teammates.

“We worked really hard for this.”

Allen was the spark early on for the Mystics with four points, two rebounds and a block in a 6-0 start. The Wildcats finally got onto the scoreboard with a three from Siobhan Prior only for Jones to reply at the other end.

The GB guard added her second to put Manchester up 17-9 before the Wildcats cut the gap to five at the end of the first.

Manchester quickly established a double-digit advantage through scores from Allen and Jade Lucas. Jones was the first into double digits to give her side their largest lead of the game at 20-32.

However, the Wildcats put together a 10-0 across the half-time break to close within two points before Lauren Hebert tied the game at 37 at the midpoint in the third.

Manchester then produced a timely response and finished the quarter with a 15-3 burst, led by Bailey and Allen with Jones ending the period with another triple.

The Mystics consolidated their advantage in the fourth and there proved to be no way back for the Wildcats who were unable to add to the Betty Codona Classic title won earlier in the season.