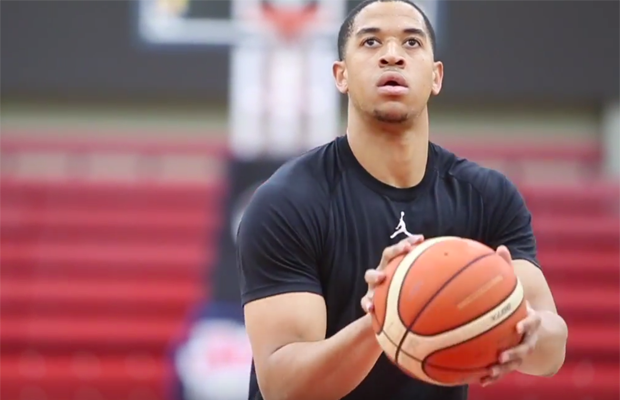 Myles Hesson has already begun pre-season training with new side Gravelines having arrived in France last Sunday ahead of the upcoming season.

The 26-year-old was a notable absentee when the GB Senior initial 24-man squad was announced with Hesson later revealing it was down to club commitments.

Hesson described the situation as ‘unavoidable’ with Head Coach Joe Prunty unable to include a regular of his reign.

“I just couldn’t do both,” he said when speaking to Hoopsfix.

“I already had an offer on the table and had to make a decision, putting myself and my family first.

“I’m disappointed and upset at not being able to be there, but I’m sure in the years to come, I’ll be back in the mix.”

The GB Senior squad will be cut down to 16 players on Monday ahead of camp, and Hesson believes there is enough quality in the squad to achieve qualification to EuroBasket 2017.

“We definitely have a good chance,” he said.

“There’s a few new faces in the squad and guys that are playing in top leagues so it will be good to see how they do.

“I hope we can do well and I’m confident we can beat Hungary, Macedonia and Luxembourg in our group.”

Despite missing out on GB duty, Hesson will still have his own European experiences this season with Gravelines competing in the FIBA Europe Cup. And he isn’t alone with fellow Brits, Ovie Soko and Gabe Olaseni also set for European competition with Murcia and Dinamo Sassari respectively.

The added bonus of playing in the competition is something to look forward for Hesson with higher ambitions on his mind.

“It will be good to compete against strong opposition in the FIBA Europe Cup and test myself.

“I expect a demanding role to be asked of me. We have quite a lot of scorers on the team and I believe I’ll be one of them.

“It has always been a goal of mine to play in the Euroleague and I see this competition as a perfect stepping stone.”

Earlier this summer, Hesson worked out at the Leicester Sports Arena to start his preparations and was grateful for the opportunity to use the impressive facility.

“It’s a beautiful arena and nice to see that in England,” he commented.

“It was perfect for what I needed – it was available for me, and no sign of badminton anywhere.”

Hesson already has a season under his belt in the French Pro A after playing for Dijon last campaign, where he averaged 10.9 points per game along with 3.5 rebounds in 34 appearances.

The Birmingham-born forward has also played at a high-level in Germany with his career continually on the rise since making his pro debut for Essex Pirates over five years ago.

“I’m very pleased with the progress of my career – my aim is to keep improving year-by-year,” he explained.

“I had to adjust my playing style [last season] and used the mid-range more than in Germany so want to keep building on that for next season.

“I want to be more efficient in everything I do and have higher percentages with my shot.”

The French Pro A season starts earlier this year with Hesson’s first pre-season game with Gravelines later this month.