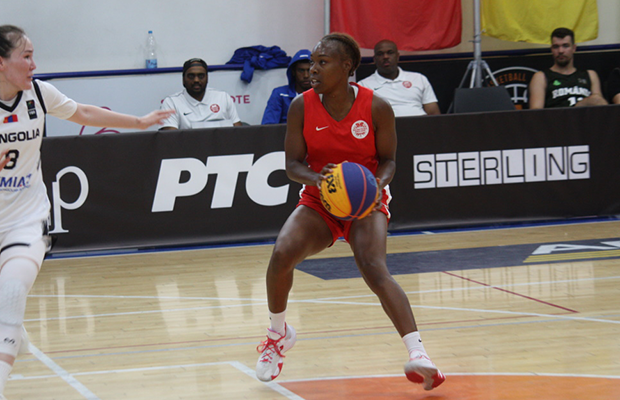 Myles Hesson will star as the hometown hero, leading a men’s squad that features Kayne Henry, Orlan Jackman and Jamell Anderson – his second Commonwealth Games, while on the women’s side, Shanice Beckford-Norton – fresh off a sweep with the London Lions in the WBBL, Chantelle Handy, Cheridene Green and Hannah Jump will star.

“I am really pleased to announce the octet of players who will be representing England this summer in the inaugural 3×3 competition,”
BE’s Head of Talent and Performance Steve Bucknall said.

“Both the men and women individually and together embody the dynamism, grit and poise that is English and British basketball, and I believe wholeheartedly in our potential for medals and crowd-pleasing performances.

“3×3 and the Commonwealth Games will prove to be a platform to inspire and engage many more people in all forms of basketball and create a legacy of participation.”

📸 Commonwealth Games 3×3 venue at Smithfield in Birmingham coming together 👀

(picture as of 3 weeks ago!) pic.twitter.com/8yyfGevik5

The 3×3 form of basketball will make its Games debut at the Smithfield site in Birmingham city centre between July 29 and August 2, with the full schedule yet to be released.

Since the end of May a Commonwealth Games selection process has been underway, starting with a longlist of players assembling for a four-day camp in Manchester, before being slimmed down through preparatory 3×3 tournaments in Romania, Serbia and France.

“It really means a lot to be playing for England,” Hesson said. “I have been watching the Games since I was a child and to be competing in my hometown for England is something I never imagined, but I am looking forward to.

“Personally, and as a team, we are hoping to get a gold medal so that’s what we are preparing for.”

Cheridene Green added:
“We have a great chance to do well. All the tournaments we have played at over the summer have prepared us for this moment. I hope to get a medal from these Games, and to have fun. To be out there playing in Birmingham means family can come watch. I hope the British public will see our passion for the game – whether it’s 3×3 or 5v5.”

GB international Temi Fagbenle was considered for selection but she is still recovering from an injury picked up at the end of the 2021/22 season.

Australia, Canada and New Zealand will be among the favourites, with hosts England determined to be among the medals as they were in 2018 Games, when the women sealed a historic silver medal in the 5 on 5 competition.