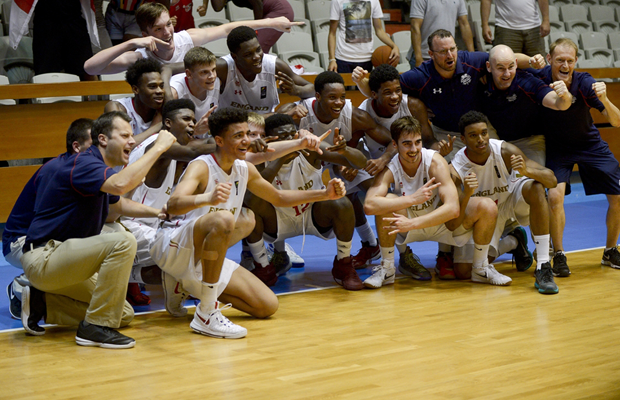 England Under-16s finished fifth at the Division B European Championships after a 72-53 win over Belarus on Saturday afternoon in Sofia, Bulgaria.

Unable to get clear in the first three quarters, England used a dominant 14-5 run to open the fourth quarter and seal the win.

“For us to close out the tournament with high energy and high tempo, executing our game plan was key,” said Head Coach Alan Keane after the game.

“The win by such a margin was a result of committing to our principles of play, fighting until the end with bravery. The commitment of the players and their families has been nothing short of outstanding. It was such a pleasure to coach a group of young men who are even better people. All have bright futures and it will be exciting to see them continue to grow and develop after this experience.”

Jacob Round (dunking in the video above) had 15 points, 5 rebounds and 4 assists, Mate Okros had 14 points and Daniel Ogoro joined them in double figures with 12. Josh Ogundele grabbed 11 rebounds to go with his 5 points, while Kareem Queeley (pictured) finished with 5 points, 7 rebounds and 5 assists.