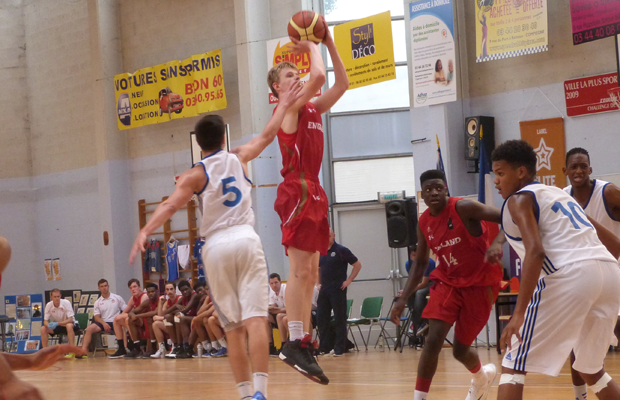 Jacob Round converted a tough three point play with three seconds remaining to give England Under-16s a 64-63 win over Czech Republic on Friday afternoon at the Division B European Championships in Sofia, Bulgaria.

Trailing by 14 at half time, England refused to go down without a fight and led by Mate Okros – who had 18 of his team-high 21 points in the second half – clawed their way back into the contest.

Within 8 with a little over 7 and a half minutes left in the game, a 10-2 run saw England tie the contest at 54 with 3 minutes remaining before Czech once again pulled away to take a 5 point lead and appeared to regain control before England once again fought back.

“Down 14 at half time we had to get the balance right of holding players accountable for effort and execution in first half and building belief that we can win this game,” Head Coach Alan Keane said after the game.

“Full credit must go to all 12 players who came out in the second half and committed to excellence in each moment which transferred to better box outs, better rebounding, better offence and braver mindsets. We believe that belief itself is one of our strongest weapons especially in moments like today when we need it most. The players will enjoy this moment for a few hours while the coaching staff are now preparing for the next game. We are not satisfied with anything until we win the final game.”

England will now play for fifth place on Saturday at 2pm against the winner of Belgium – Belarus.