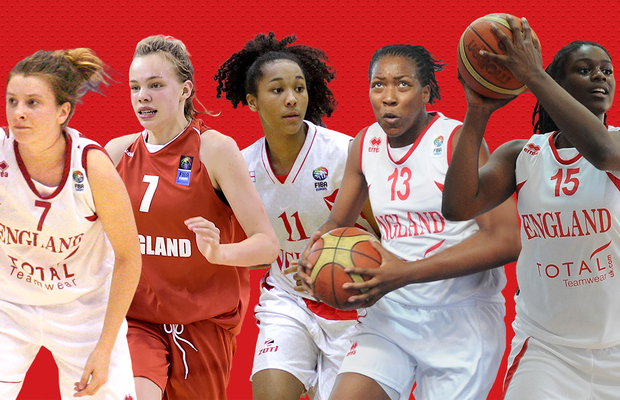 We conclude our look back on England/Scotland/GB Under-16 teams at the FIBA European Championship by selecting our All-Decade Team from 2010-2019.

Note: Only Division A/B tournaments were included with England and Scotland competing as separate nations from 2004 before a GB team was formed in 2017.

We run through the reasons behind each of the five spots as well as the players who were in contention: Leah McDerment made her debut at the Under-16 European Championship as a 13-year-old in 2009 and went on to represent England in another three tournaments including their promotion run in 2011.

The former Barking Abbey guard was part of a stacked group that went close to securing a rise to Division A the previous summer. McDerment was a solid contributor at the guard spot for England and continued to improve year-upon-year.

In 2012, McDerment had the chance to become the leader of the team and used her experience to help the group through the difficult challenge of Division A opposition. She led England in scoring with just shy of 10 points per game with a personal best of 17 points coming against Czech Republic.

McDerment opened up on her time with the Under-16s as part of four straight summers on National team duty, reflecting on her experiences on-and-off the court in a recent feature, HERE.

In contention: Chantel Charles played alongside McDerment in 2009-10 with her second summer resulting in a near promotion as England finished fourth. A recent debutante with the GB Senior side, Charles holds the record for assists in a tournament with 32 having also contributed a stat-line of 21 points, seven rebounds, five assists and seven steals in a win against Germany. One of the brightest British talents of her generation, Holly Winterburn has always played a starring role for the National team at all age groups and has her name across the All-time U16 British leaderboards.

The UC Davis transfer came out firing in 2016 with 19, 18 and 20 points scored respectively in the opening three games of the tournament with the run including a double-double against Bosnia and Herzegovina.

Winterburn went on to score 107 points (third most for a Brit since 2004) at an average of 13.4 pper game along with 3.0 assists and 3.6 steals with her total of 29 steals setting a record for British players at an Under-16 European Championship.

Her introduction with the Under-16s came the year before in Division A during a tough campaign that saw England finish 0-9 coming up against the European elite. Winterburn collected 21 steals including six in consecutive games against Croatia and Serbia, whilst grabbing 10 boards against Belgium.

In contention: Jay-Ann Bravo-Harriott was part of the England squad that earned promotion in 2011, elevating her role from the previous year. Her scoring average was boosted to 11.4 points per game with a 24-point outing in the final loss to Germany as well as accumulating 6.1 rebounds and 2.5 assists for the tournament.

Winterburn’s team-mate for both summers, Hannah Jump knocked down a combined total of 30 three-pointers with her 2016 effort of 17 only bettered by Scotland’s Ruth Allison. The Stanford sharpshooter netted 20 points against Latvia in Division A before averaging 10.5 points the following summer. One of the certified locks in the lineup, Savannah Wilkinson was dominant during the promotion campaign in 2014. A tournament opening 28 points (British scoring record) along with 13 rebounds set the tone for the first of six successive double-doubles that also led England to 6-0 en route to the final.

Wilkinson neared a triple-double in a win over Norway after contributing 11 points, 11 rebounds and eight steals and was named to the All-Tournament Team with averages of 14.9 points and 11.6 rebounds. The accolade followed a silver medal as England came up short against Germany.

The current Florida State Seminole made her first appearance at the Under-16 European Championships at the age of 13 in Division A two years earlier, starting out with eight points and eight rebounds against Croatia with England going 0-9 in the tournament.

Wilkinson returned the following summer and averaged 8.1 points and 8.4 rebounds per game including 14 points and 10 rebounds in a win over Belarus as England finished with four wins from seven.

Read more on her story with our recent feature, HERE.

In contention: Janice Monakana was part of talented rosters in 2010 and 2011 and played an underrated role for the team. The two-time WBBL finals MVP produced a 16-point, 16-rebound performance in a semi-final loss to Hungary in 2010 before nearly averaging a double-double the following summer in the promotion year with six games with 10+ rebounds. Shequila Joseph did actually spend three summers with the Under-16s, though her first tournament in 2009 falls outside of the last decade. The now 25-year-old scored 100+ points in back-to-back summers with her 2010 tally of 124 only bettered by Lauren Thomas-Johnson’s 125 in 2004.

Joseph helped lead England to the semi-finals as they had two shots at promotion, but missed out with defeats to Hungary and Portugal – in which she scored 25 points in the third place decider.

A year later, Joseph returned for a third summer along with the core group of Leah McDerment, Jay-Ann Bravo-Harriott, Janice Monakana and Cheridene Green. Joseph averaged 12.9 points, 6.3 rebounds and 2.4 assists in making the All-Tournament Team as England went one step further this time around.

20 points and 11 rebounds were produced in the quarter-final win over Romania before promotion was achieved by beating Latvia. Joseph also netted a combined 28 three-pointers in 2010-11 to add an outside scoring threat as well as inside.

In contention: Two players from the same team earn honourable mentions with Loren Christie and Esther Little both playing for England in 2016 before representing GB when they took over all age groups in 2017. Christie was captain and produced back-to-back double-doubles to end the tournament on a high with 14 points and 16 rebounds in a close loss to Macedonia. Cheridene Green also played in three straight summers for England Under-16s from 2009-11, but again the first year is discarded for the purpose of the All-Decade Team.

The 24-year-old has become a regular for the GB Senior team since making her debut in 2019 having showcased her potential from an early age, also excelling as a junior at Sevenoaks Suns.

In 2010, Green posted 17 points, 13 rebounds and four steals in a win against Germany before putting up 25 points and 15 rebounds in a quarter-final victory over Bulgaria. The campaign ultimately ended in a fourth-placed finish as defeats to Latvia and Portugal followed.

Green upped her production 12 months later, averaging 11.6 points and 10.5 rebounds over eight games as England ensured they secured promotion for the first time. A 15-point, 14-rebound double-double was key to the semi-final win over Latvia that clinched a spot in Division A with Green recording five straight games with at least 10 rebounds.

In contention: Easily, the most difficult selection choices with Isi Ozzy-Momodu making a serious push following her impressive tournament in 2019. The talented teenager dominated the glass for GB Under-16s, averaging an eye-catching 16.1 rebounds per game with at least 20 rebounds in a game on three separate occasions.

Her older sister Ire Ozzy-Momodu averaged 9+ rebounds in successive tournaments in 2014-15, helping England secure promotion in her first year, while Abigail Johnson was another strong rebounder for England in 2013, pulling down 14.8 boards per outing including a British single-game record of 26 rebounds.

Check out @HoopsfixWomen on Twitter and Instagram for the rest of our U16 content with archive video footage, all-time leaderboards, Top 10 Plays from the past three years, standout performances as well as the aforementioned reflective article with Leah McDerment.