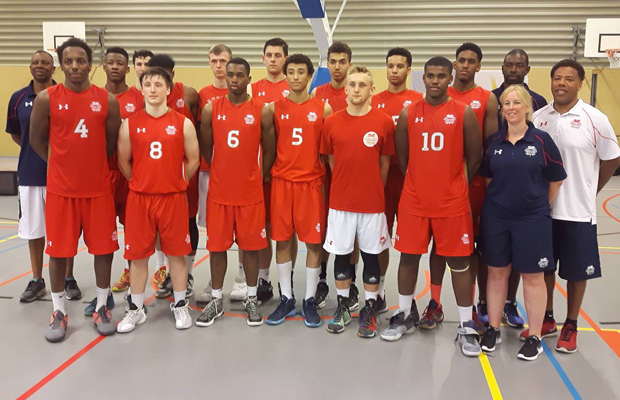 England Under-18’s completed a 3-0 series win over the Netherlands with a 72-63 victory, this morning.

Steve Bucknall’s side had recorded two-point wins in each of the opening two games in their series away from home, and used a strong second half display to wrap up a successful trip in style.

Brian Amabilino top scored once again with a 15-point haul, while Henri Langton was also in double figures with 12 points with Carl Wheatle and Nelson Boachie-Yiadom adding nine and eight points respectively.

England were still in control with an eight-point advantage midway through the second before the hosts finished the half with a 13-4 close to lead 35-34 going into the interval, despite 10 points from Langton.

Amabilino scored five points in a 7-0 start to the third and after the home side had closed to within a single point, England pulled away with the final nine points of the period including five from Dan Akin to make it 54-44 in favour of the visitors.

Amabilino added two triples in the fourth to keep his side ahead by double figures and the gap proved too much for the Netherlands to haul back and England were able to close out an eventual nine-point victory.

With the three game series over, Bucknall will look to make two final cuts to get the final European Championships squad, which begin their campaign on July 29 in Skopje, in the Republic of Macedonia. England are in Group D with Albania, Slovakia, Scotland, Ukraine and Georgia.