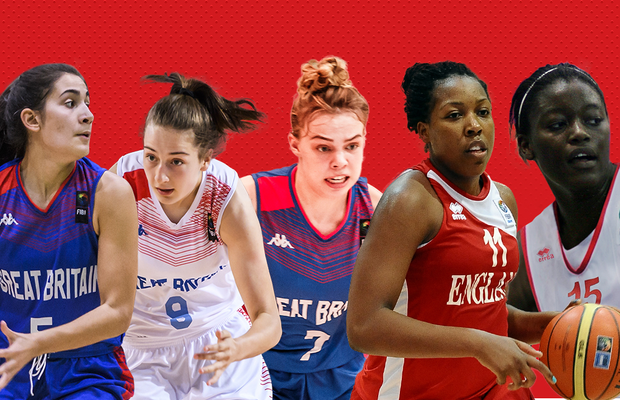 We conclude our look back on England/Scotland/GB Under-18 teams at the FIBA European Championship by selecting our All-Decade Team from 2010-2019.

Note: Only Division A/B tournaments were included with England and Scotland competing as separate nations from 2005 before a GB team was formed in 2017.

We run through the reasons behind each of the five spots as well as the players who were in contention: Dani Lozzi did a bit of everything as captain of the GB Under-18s in 2017; filling the stat-sheet in multiple categories throughout the tournament.

The Lynn University senior finished as the leader in steals with a whopping 41 at 5.1 per game as well as dishing out 4.6 assists per game for the second best average across Division B.

Lozzi started with nine points, seven rebounds and eight steals in a win against Ukraine and followed with another eight steals in a 120-point win over Moldova, whilst her best assists tally came against Macedonia after recording nine.

However, despite all of GB’s promise, they came up short in their quest for promotion with Lozzi looking back on the tournament in our recent feature, HERE.

In contention: Rosie Hynes just missed out on a century of points for England Under-18s in 2011 after averaging 11.0 points per game, making it onto the Top 10 list of British U18 scorers, whilst handing out 15 assists. Charlotte Ellmore gets the nod in the second guard position on the All-Decade Team after providing a reliable presence in consecutive summers without getting the headlines.

The now-20-year-old hit triple figures in scoring in 2018 with an impressive 27-point haul in a win against Montenegro. Ellmore also claimed a double-double against Greece and often stepped up with a timely triple, netting a total of 12 in each summer.

The 2018 WEABL final MVP also handed out 36 assists across the two years, forming a back-court tandem with Dani Lozzi (2017) and Alix Henderson (2018) while continuing her partnership with Holly Winterburn.

Ellmore’s development was evident to see having carved out a bigger role on the National Team from when she represented England Under-16s in 2015-16; honing her skills at club level.

In contention: Jay-Ann Bravo-Harriott played two summers for England Under-18s; being part of the 2012 roster that earned promotion before playing a bigger role in Division A and averaging double figures in points as the team’s leading scorer. Following on from her spot on our Under-16s All-Decade Team (seen here), Holly Winterburn was a firm lock for a place on the Under-18s equivalent.

Both scoring campaigns in 2017 and 2018 place her inside the Top 10 on the All-Time British U18 leaderboards with Winterburn earning a selection on the All-Tournament Team in 2017 as GB pushed for promotion.

The exciting talent continued her development as a leading figure with 13.8 points, 4.8 rebounds and 2.5 assists per game including a best of 31 points (a joint British U18 record) coming against Slovakia in the group phase.

Winterburn upped her averages the following summer, particularly in the rebounding department – boosted by 14 boards collected against Greece having netted 25 points against Turkey early on in the tournament.

Not only was Winterburn a constant scoring threat, the UC Davis transfer also turned provider with a combined 43 assists across the two summers and racked up 50+ steals as a menace on the defensive end.

In contention: Scotland’s Erin McGarrachan had a big year in 2010, averaging a double-double including a British U18 record of 27 rebounds in a loss against Luxembourg. She finished with averages of 13.4 points and 11.3 rebounds per game, though Scotland were unable to pick up a Division B win.

Savannah Wilkinson averaged 8.9 points and 8.4 rebounds for England Under-18s in 2015 as her side finished with a 3-5 record in 12th place. The FSU forward was an easy lock in our Under-16s Team of the Decade. Just like Winterburn, it’s an All-Decade Team double for Shequila Joseph after impressing in consecutive summers with England’s Under-18s.

Joseph helped lead her country to another promotion after putting up 15.3 points during the 2012 campaign with a place on the All-Tournament Team as England secured a silver medal.

The versatile forward netted 23 points in a five-point win over Germany earlier in the tournament and had a team-high of 22 points as England came up short in the final in a 74-76 loss against Belarus.

Joseph was able to play Division A for the first time the following summer and showed her talent at the top level with 8.8 points and 5.9 rebounds per game in 2013 with a 20-point haul against Croatia and a first double-double coming against Greece.

In contention: Esther Little dominated the battle of the boards last year for GB, setting the British U18 record with 97 rebounds in total at an average of 12.1 per game. The Ipswich star showcased her all-round talent even perhaps without full freedom, particularly in 2018.

Chloe Gaynor has the best British U18 rebounding average after pulling down 89 boards in 2016 at a rate of 12.7 per game. The former Barking Abbey forward produced three double-doubles and had four games with at least 13 rebounds. A player that needs no introduction, Temi Fagbenle will go down as one of the greatest ever players in British basketball history – becoming an WNBA champion and twice earning a spot on an All-Tournament team at a major international competition in recent years alone.

Re-wind 10 years and Fagbenle’s success comes as no surprise having already shown vast amounts of potential with England Under-18s in 2010, ranking third in points and second in rebounds for totals in an individual tournament in the British U18 All-time charts.

Fagbenle dominated with 16.0 points and 12.0 rebounds per game across eight appearances with seven consecutive double-doubles to open the tournament including 17 points, 15 rebounds as well as five blocks in a win against Finland.

The 2012 Olympian helped her side to four straight wins, though their promotion hopes were ended with a contrasting four successive defeats following the bright start with Fagbenle struggling with a knee injury during the tournament.

Fagbenle had competed for the Under-16s in the previous decade, in 2008, and would spend a summer with GB’s Under-20s in 2011 before becoming a prolific presence in the Senior side.

In contention: Cheridene Green played a major role once again in helping secure promotion for England after averaging a double-double in 2012 with 13.4 points and 10.4 rebounds per game. An 18-point, 18-rebound double-double was produced in the semi-final win over Belarus.

Check out @HoopsfixWomen on Twitter and Instagram for the rest of our U18 content with archive video footage, all-time leaderboards, Top 10 Plays from the past three years, standout performances as well as a reflective article with Dani Lozzi.