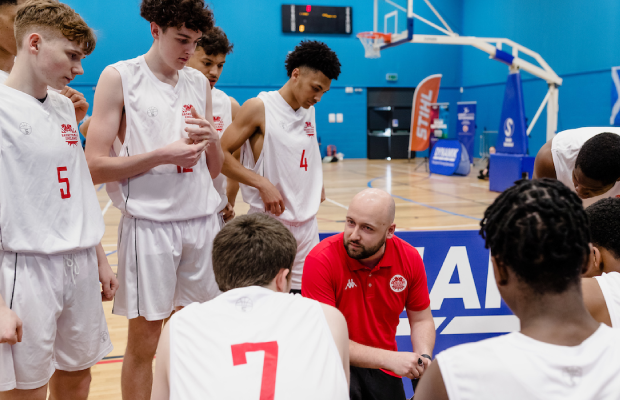 England’s Under-18 Men came out on top at the inaugural Four Nations Tournament as they recorded three wins from three across the two days in Cardiff, Wales.

Will Maynard took charge as head coach with England with victories over Ireland, Scotland and Wales to finish with a perfect 3-0 record.

England met Wales in a decisive final game on Thursday and they overcame a slow start to secure a comfortable 74-53 victory having been seven points down at the end of the first quarter.

Four players reached double figures in scoring including two double-doubles as Jason Soodeen posted 14 points and 10 rebounds and Zamoku Weluche-Ume finished with 12 points and 11 boards. They outscored Wales 19-10 in the second quarter to lead at the half and powered clear with a 22-6 final period.

England’s tournament began on Wednesday with a 78-58 win over Ireland before they returned to action the following day to beat Scotland in emphatic fashion with a 94-40 victory.

Weluche-Ume top scored in both of the wins with a tournament-high 20 points against Ireland before netting 15 points in the 54-point win over Scotland with three other players in double figures as Soodeen produced 13 points, nine rebounds and seven steals.

Wales went 2-0 on the opening day as they saw off Ireland in a 77-58 success and then edged out Scotland for a dramatic 59-58 triumph.

Ironically, it was Lucas Scotland who delivered the win for Wales with a pair of late free throws to seal Scotland’s fate. Oliver Wright had top scored with 22 points in the victory over Ireland to start the tournament.

Meanwhile, Ireland claimed their only win of the tournament with a 76-59 victory against Scotland on the final day with 20+ point games from Aivaras Uosis and Tony Ezeonu.