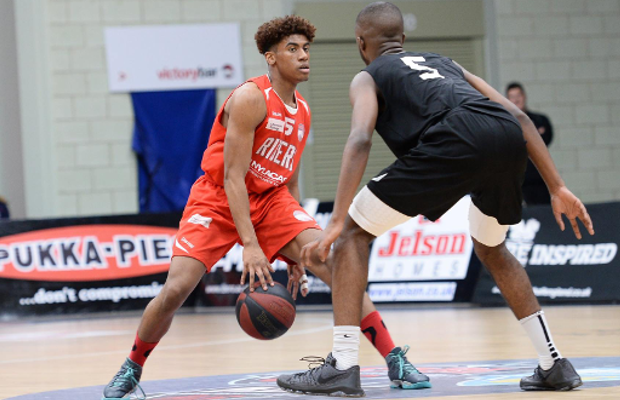 2016 has seen one success after another for Andre Arissol and the recent GB Under-20 call-up is ready to showcase his growing talent at the Hoopsfix All-Star Classic in Brixton, on Sunday.

Arissol is one of four GB U20’s playing in the Under-19 game alongside Kyle Carey, Moses Byekwaso and Shaquille Walters as some of the nation’s top junior talent assemble in South London this weekend.

“It’s so exciting to be part of the Hoopsfix All-Star Classic,” said Arissol.

“It’s a massive thing for me to be recognised – I was watching last year so to be going up against the top players in the country is a great feeling.

“I’m going to go for it – I always play to win, but I also want to show how much I’ve grown as well.”

The 19-year-old began the year by helping Loughborough Student Riders win the Patrons Cup with a display of 13 points, four assists and four steals earning Arissol the MVP award in the 96-69 victory.

And the Northampton local believes it’s a case of hard work paying off ahead of his first appearance in the Hoopsfix All-Star Classic.

“When I was first at Charnwood, I wasn’t the best and wasn’t picked for the EABL team,” Arissol recalled.

“But I didn’t give up and believed in myself which is why winning the EABL Championship meant so much, especially as we weren’t favourites.

“To experience it with Tim Fava and Thomas Yome too was great because we’ve all been through a lot.”

The icing on a breakthrough season for Arissol came courtesy of a call-up to the initial GB Under-20’s squad, something he admits has been a personal target of his for some time.

“It’s a massive privilege,” he said of his selection.

“It’s probably the biggest thing that has happened. It has always been a target of mine, particularly after playing for the Under-18’s.

“It’s been in the back of my head throughout the season, but the hard work doesn’t stop here.”

Arissol has an additional chance to impress GB U20 Head Coach Andreas Kapoulas this Sunday as the Bristol Flyers play-caller takes charge of Team Black in the HASC Under-19 game.

“It’s a little bit of an extra incentive to play well,” the Charnwood youngster admitted.

“I’m glad [Andreas] is coaching, it’s exciting and gives him an extra look at me.

“I know I have to keep being confident at this stage.

“There is no point in being negative, I want to make the final 12 and I believe that I can do so.”

Check out the U19’s roster mix, featuring Arissol, as a preview of what is to come on Sunday.