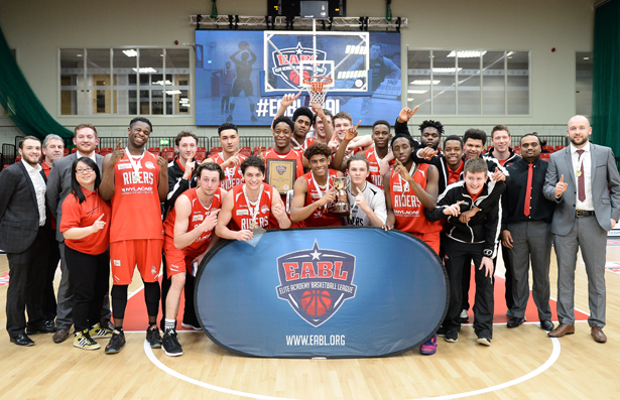 Charnwood College pulled away for a 73-62 win over Myerscough College and claimed the 2016 EABL National Championship on Wednesday evening at Leicester Community Sports Arena.

Charnwood rushed the floor in jubilation as the final buzzer sounded, having handed defending champions Myerscough their first loss in almost two years in the competition.

Thomas Yome picked up MVP, finishing with 10 of his 19 points in the fourth quarter, along with 5 rebounds, 5 assists and 3 steals, while missing just two shots.

“It’s crazy, the journey we’ve had as a team,” said Yome. “We’ve had to regroup and now we’re champs of the EABL. It wasn’t easy, we kept to the game plan and kept to what Coach wanted us to do.”

Despite trailing since the opening period, Myerscough refused to go down without a fight, led by a third quarter charge from Kyle Carey who finished with a game-high 23 points, adding 8 rebounds, and 5 assists. Carey had 9 points over the final 4 minutes of the third period, as Myerscough reduced the deficit to two points, but that was as close as they would get.

Key baskets from Tim Fava, Morgan Carter and Andre Arissol opened up the fourth quarter, before Yome’s heroics where he reeled off 9 consecutive points for Charnwood to put the game out of reach for good.

“Fantastic effort. I’m extremely proud of the players, we’ve had a lot of ups and downs this season behind the scenes that people don’t see but these guys have been really good. They’ve allowed me to coach them hard which I appreciate and they deserve this for all their hard work and commitment to the programme this year, it’s a great group of individuals and I’m so happy for them.

“It’s the fifth time we’ve played them and the first time we’ve managed to beat them. Myerscough are a great programme, I think that’s their first loss in the past two years so respect to Neal Hopkins and his team, he does an outstanding job up there and we has to play really, really well to beat them.”

Arissol scored a team-high 21 points, while Fava added 12 and 11 rebounds – it was the perfect last game for the senior trio who will graduate from Charnwood this summer.

“I want to mention our three Senior guards who we’re going to lose this year; Tom Yome, Tim Fava, and Andre Arissol, who’ve just been outstanding leaders for this programme, and shown the first and second year guys how to operate. They’ve set the bar really high now for the standards that we expect in this programme.”

Carey was the only player in double digits for Myerscough, with Zion Tordoff adding 8 points and 13 rebounds, while Ayo Nuwe also finished with 8 points.

Watch the full replay below: