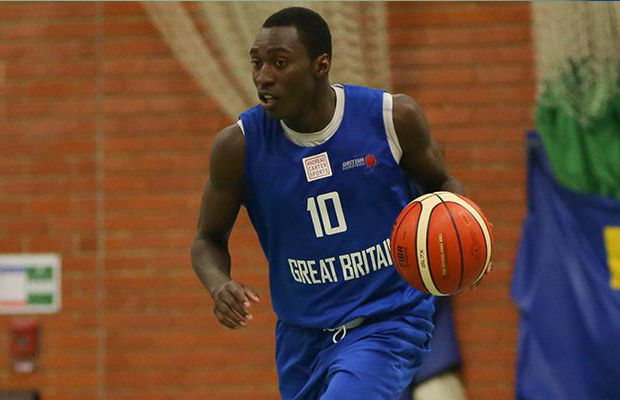 British Basketball has named the initial list of 22 players will battle it out to represent Great Britain at the U20 European Championship Division B in Greece this summer.

The squad will is headlined by national team stalwart Jules Dang Akodo, who has been playing professionally in the Slovenia Telemach League, while there is also a spot for Dwayne Lautier-Ogunleye who was previously with Head Coach Andreas Kapoulas at SGS College and with the Bristol Flyers in the British Basketball League (BBL). He comes into the camp off the back of an impressive Freshman year in the States where he top scored and secured All-Team honours in his Conference at Bradley University.

Meanwhile Deane Williams was also on board last year and he recently helped his College side Augusta University reach their Tournament Final, with Pharroh Gordon also excelling and posting a great season at St Rose College.

Of those players searching for a potential GB debut at the U20 level, Northern Colorado signee Kyle Carey has made people sit up and take notice with Myerscough and Lancashire Spinners. Elsewhere on the list, Andre Arissol of Leicester Riders also led Charnwood College to the Elite Academy Basketball League (EABL) title and Shaquille Walters provided the main thrust behind Peckham Pride’s undefeated season conquering the U18s National League Final Four.

Two Scots make the cut, with Findlay Wood and Fraser Malcolm, while lefty guard Liam Carpenter will be back from Germany to also fight for his spot.

Earl Russell, Theo Oghide, Kinglsey Nwagboso, Callum Lawson, and Boban Jacdonmi will all be battling for a place in the front court along with Malik Eichler – the only name on the list hailing from outside the UK.

The German born seven footer, has played in Germany for Alba Berlin, as well as for Real Madrid’s cadet team and Cajasol Sevilla before heading to the US this season with MacDuffie Prep.

Four of the GB squad will be suiting up in the Under-19 game at the Hoopsfix All Star Classic next week (buy tickets), with another 8 who were selected last year.

The invitees will all attend a preparation camp at the University of Essex in Colchester on 27 June as Coach Kapoulas puts the candidates through their paces. He will be joined by Assistant Coach, James Vear from Barking Abbey who has fulfilled the same role in recent years – with Josh Merrington also joining the coaching line-up as an Assistant, having worked with Charnwood College and Leicester Riders last season.

Prior to heading to Greece for the FIBA U20 European Championship Division B, the team will compete in a warm-up tournament in Portugal between Friday 01 July and Monday 04 July, when they will also face Sweden and Belarus. They will then step out for further friendlies against host nation Greece and Portugal prior to the start of the U20 tournament in Chalkida.

Further details on the friendly games will be made available soon.