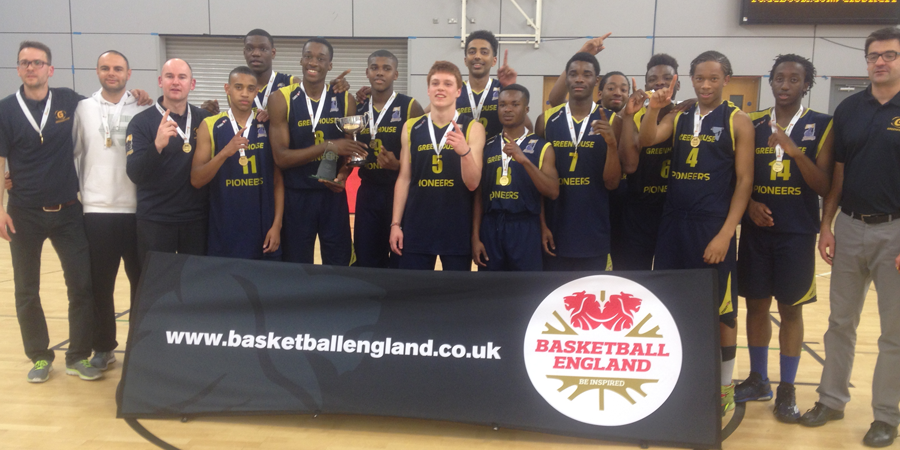 London Greenhouse Pioneers were crowned the 2015 Under-18 National Champions, their first ever Junior National title, after dismantling Bristol Academy Flyers in the second half for a 72-60 Final victory on Sunday at the EIS Sheffield.

Pioneers Captain Ola Ayodele (pictured below, left) picked up MVP for his all around performance of 11 points, 8 rebounds and 8 assists as Greenhouse neutralised Bristol big man Deane Williams who had dominated his semi-final.

“To be crowned national champs is humbling, satisfying and an honour but from day one it was always felt that we are capable of winning both the national cup and league. We came up short in the cup final which helped to drive us more this weekend,” said Pioneers Head Coach Alan Keane.

“All credit must go to these 12 players who executed and delivered what was necessary to get the job done. I feel privileged and blessed for them allowing me to coach them. The future is very bright for these guys and Greenhouse Pioneers. While our ethos at Pioneers is to do what’s best for the player we are moving some guys on to better opportunities I look forward to watching these guys continue to grow and develop and no better way to finish your Pioneers career as National Champs.”

Despite Deane Williams being forced to the bench on two fouls just 2 and a half minutes in to the game, Pioneers were unable to shake the Bristol squad who kept within striking distance up until half time.

However, a dominant third quarter, punctuated by RJ Eytle Rock’s fifteen footer at the buzzer saw the lead stretch to 20, from which point Bristol were unable to get back into the game.

Williams, despite being in foul trouble all game, finished with 7 points, 12 rebounds, 4 assists and 2 steals, while Joseph Walsh-Norman had 11 points.

With Peckham seemingly in control throughout the majority of regulation and leading 61-48 heading into the final period, Greenhouse stormed back into the game, tying it up through the first five minutes of the fourth, and then surviving a game winning attempt at the buzzer from Shaquille Walters.

In OT, it was all Greenhouse, as Pablo Otero hit three straight threes on consecutive possessions to ice the game, while Omar Bishop was huge inside.

Shaquille Walters led Peckham with 19 points and 12 rebounds, while Kemar Hawes had 14.

Semi-Final 2
Bristol Academy Flyers vs Manchester Magic
Deane Williams had the performance of the weekend with 26 points, 16 rebounds and 3 blocks to lead Bristol past Manchester 71-69, ending Magic’s hopes of a three peat.

Khani Marius came through down the stretch, knocking down what proved to be the game winning free throws to finish with 18 points, as Bristol secured the upset.