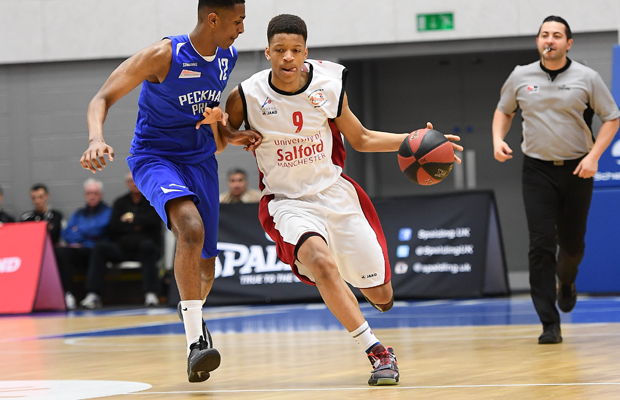 Manchester Magic made it six straight Under-16 National Championships with a 75-59 win over Cheshire Wire in the final on Sunday at the Amaechi Basketball Centre in Manchester.

Magic’s dominance of the Under-16 age group is unmatched in recent years, as they pulled away in the fourth quarter behind MVP Michael Anumba, who scored 10 of his 21 points in the final period after being limited by foul trouble the rest of the game.

“It’s something unbelievable, I’m so happy for my team,” Anumba, who won his second consecutive U16 title, said after the game. “It was a very difficult game, my coach helped me a lot throughout the year and in this game it really showed our progress despite my foul trouble.”

There were multiple lead changes throughout the first half, but Manchester used an 8-0 run at the end of the third quarter to create a lead they wouldn’t give up the rest of the way. Magic held Cheshire to 8 points in the fourth to seal the win.

“It feels very good,” added Manchester Head Coach Aurimas Verbukas. “It’s been quite a good season for us, especially when everybody stepped on the court as well. We really stepped up in this final.

“Michael really stepped up in the fourth quarter and I’m really proud of him and the rest of the team.”

Cheshire were led by 16 points and 16 rebounds from Arinze Emeka-Anyakwo, with Josef Bielak joining him in double figures with 13.

Alex Roberts led the way for Manchester with 17 points, while Michael Anumba added 16.

Demilade Adenuga knocked down a number of tough jumpshots on his way to 24 points for Peckham.

Cheshire jumped out to a 20-15 lead 7 minutes into the game and never looked back as Newham were chasing from behind the rest of the way.

Jozef Bielak came off the bench for the Wire and helped himself to 25 points, Jamie Grey dominated inside for 22 points, 10 rebounds and 5 assists, while Arinze Emeka-Anyakwo added 16 points and 10 rebounds.

Ternon Serrant had 15 points for Newham, while Devante Abana-Odita had a 12 point, 15 rebound double double.