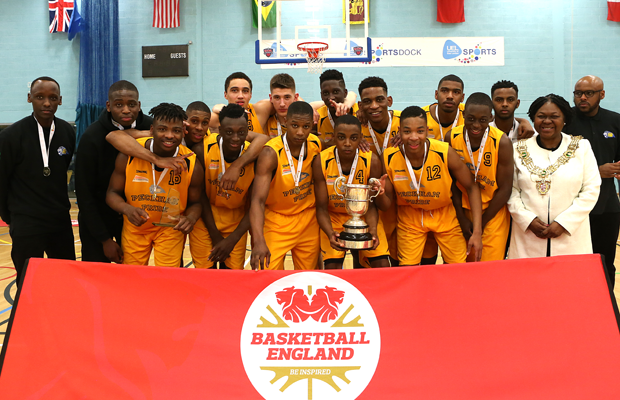 Peckham Pride raced into an early lead and never looked back on their way to a 104-70 victory against Leeds Allerton High School Force to pick up the Under-18 Men’s National Cup title.

Dotun Dosunmu earned MVP honours after going 8-of-11 from the field in a 19-point haul, whilst also adding four rebounds and three assists. Four other players hit double figures for Peckham, including Gedi Juozapaitis and Kemar Hawes, who had 17 and 15 points respectively.

“They’re (the players) lucky that they’ve played with each other for years, so it’s about time everything fell into place. It hasn’t been done without a lot of headache, a lot of to-ing and fro-ing.”

The win meant a double for Peckham, also having won the Under-18 Women’s National Cup in the previous game.

“It’s massive (to win both),” Muschett added. “This programme’s just getting bigger and bigger, thanks to coaches that are coming in and making a huge huge change to what we’ve got and we’re so lucky that we have coaches in here of such quality.”

Peckham started with a 12-5 run, and quickly established a double-digit advantage inside the opening period. After a 28-point first quarter, Pride continued their free-flowing offence in the second and went into the half-time break with a sizeable 55-34 cushion.

There was no let up in the third as Peckham racked up 31 points to all but secure victory, leading by 35 heading into the fourth. And, they would see out the win in style, surpassing the century mark in the final couple of minutes.

Jake Pandza netted 28 points for Leeds, and Josh Gill added 13 to be the only other player in double figures, as their valiant cup run fell at the final hurdle.