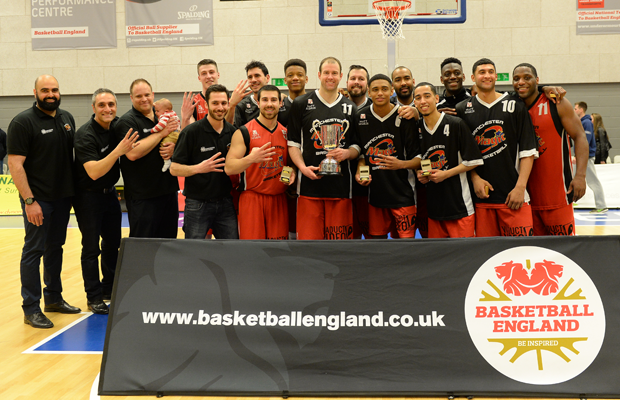 Manchester Magic completed the quadruple as they won the 2016 NBL Division 1 Playoff title with a 72-65 win over Reading Rockets on Sunday at the NBPC in Manchester.

With the league Championship, National Cup and National Trophy already secured, Magic completed their magical season with a hard fought victory over Reading, who refused to go down without a fight.

It was Division 1 Player of the Year, Ellis Cooper, who picked up yet another MVP award, finishing off with 24 points, 13 rebounds, 4 assists and 2 steals on 9/17 shooting, while proving instrumental during a game changing run in the final period.

With Manchester leading by two, Cooper scored six consecutive points to give them an 8 point cushion with a little under four minutes to play.

“It’s a great feeling and to do here in front of our fans in Manchester is unbelievable,” Cooper said afterwards.

“It was a very physical game, just how both us and Reading like it. But I felt like we were in control of things and we never looked like losing our lead at the end.”

It could be the final swan song for this Magic side, with many players expected to be departing prior to next season.

And what a swan song it was. Manchester become what is believed to be just the second team in NBL Division 1 history to complete a ‘quadruple’, joining Reading Rockets during the 2008-09 season – a squad that Manchester’s Ryan Lohfink was also a part of.

“Reading are no doubt a tough team and to see them here in a final is a testament to their programme and how they compete,” said Magic coach Paul Middleton.

“For us, winning this is a great achievement. We have the strongest team in my opinion; one of the deepest rosters so I’m not pretending that we have done something that we shouldn’t have done. It would have been a major disappointment if we had lost today. But credit to the lads who fought hard and showed determination when Reading made their runs. It is a great day.”

It was Reading who led for the majority of the game, but neither side were able to get an edge. Manchester took the lead for good with 7 minutes left to play, using Cooper’s run to create breathing room.

Antonio Robinson and D’Montre Edwards led the Reading resistance, Robinson finishing with 23 points (16 in first half), 9 rebounds and 7 assists, while Edwards added 22, 6 and 3, as the pair connected on a number of pretty plays throughout the contest.

“I am proud of my guys, we came here in good form and in good spirits,” said Readin Head Coach Manuel Pena Garces.

“We were good at the start of play but Manchester showed their strengths and were physical and well-drilled. Still, for us we have great things ahead, we have great plans for the summer and this season was the start of something good for the organisation so even though we lost, I am still excited for what is to come.”