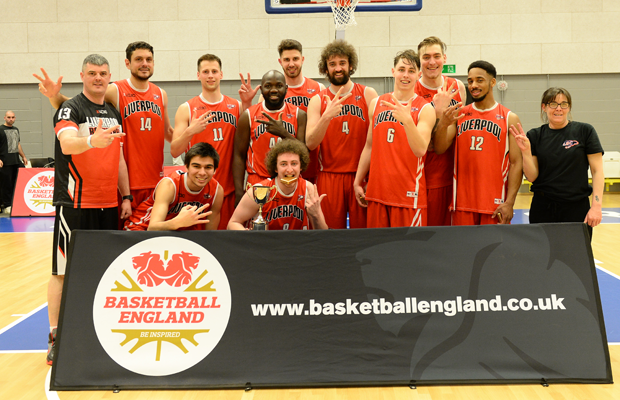 In a rematch of last year’s Division 3 Playoff final, the result was the same, as Liverpool have now won the playoff title for the last three years in three different divisions, winning D4 in 2014.

A magical play-off run from the seventh seeded side has culminated in post-season glory but it very nearly slipped from their grasp in regulation until a pull-up jumper from Jack Hudson with 29.9 seconds left in the fourth forced overtime, with a failed attempt by both sides to win it in the remaining moments.

Solent battled foul trouble throughout the game, and with D2 Player of the Year Elliot Dadds controversially fouling out in the final minutes of regulation, Kestrels didn’t have enough depth in OT.

Liverpool took control of the game in the extra period, two three-pointers from player/coach Martin Calvo gave them a 73-69 cushion and they never looked back.

Calvo finished with a game-high 23 points, 10 rebounds and 4 assists for Liverpool as he claimed MVP honours.

“I don’t think of individual awards but I feel like this is our additional team award,” Calvo said of his MVP trophy.

“We have worked so hard to be here. Of course, the transition from Division 3 to Division 2 has been hard for us all but we have done fantastically well.”

Daniel Pilkington added 16 points for Liverpool, including a dagger three-pointer in the latter stages of overtime that sealed the win, while Hudson added 11 points, 8 rebounds and 6 steals.

“It’s so hard for Martin as he has to coach and play plus this is his first season as a coach,” Liverpool’s Chris Bigley added.

“He deserves his own individual award for his hard work but it just shows how dedicated to the team he is.”

Despite the defeat, Solent have a lot to be proud of this season with a Division 2 league title safely in their trophy cabinet.

“It’s not a great time right now, but we have a lot to be proud of,” said Solent coach Matt Guymon. “Credit to Liverpool on a great final.”

Louie Kirkman led the Kestrels with 17 points and 15 rebounds, Dadds finished with 14 points and 5 assists, while Chris Scarlett joined them in double figures with 11.

Neither team could find any joy offensively as both utilised their well-organised team defences to keep the score low in the first few minutes. Solent then went on an 8-0 tear to take a 15-9 lead after one.

Liverpool were slow to get going, but towards the end of the half, they took the ball strong to the basket, drawing level from the free throw line, and a three from the corner by Martin Calvo gave Liverpool a 40-39 advantage going into the break.

A two-hand jam from Selby Hind-Wills, followed by a three-point play from Elliot Dadds gave the Kestrels a 51-45 lead mid-way through the third, only for Liverpool to roar back again and take a 57-55 lead after three.

The affair remained tightly knotted as Hudson tied the game with 29.9 seconds to go. Both sides failed in their attempts to win it in regulation, but Liverpool made no mistake in the extra session.