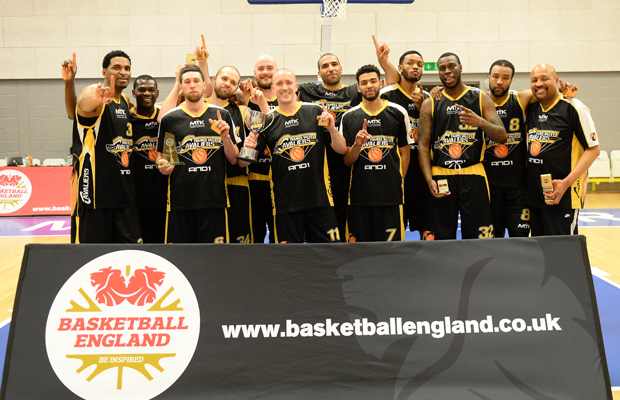 Thames Valley Cavaliers have finished the league season unbeaten at 24-0 after overcoming Team Newcastle University 89-79 in the NBL Division 3 playoff final at the National Basketball Performance Centre in Belle Vue, Manchester on Saturday.

They add the playoff title to their National Shield title won earlier this season, as they have proven to be an unsurmountable force in Division 3.

Leading by as many as 19 points in the third quarter, Thames Valley looked to be on cruise control, but Newcastle’s Robbie Lemons had other ideas. The former Stanford guard had 18 of his game-high 32 points in the fourth quarter, getting his squad to within three points before Cavaliers managed to hold their nerve.

An MVP showing from Thames Valley’s Philip Perre, who amassed 22 points and 12 rebounds, saw the Cavaliers pull out their second title of the season as they will prepare for Division 2 next year.

“This has been a great journey and with a great group of guys for whom I am really thankful to be playing with,” said Perre afterwards.

“I’ve had a lot of proud moments in my career. Winning the BBL championship was great, but winning this with my career winding down and winning it in an undefeated year is something special too.”

Despite shooting just 28 percent from the field, Martelle McLemore led the Cavs with 23 points and 11 rebounds, including a huge momentum changing three in the final minutes.

“This has been a difficult year for us, but it is a testament to the guys that they have risen to the challenge and finished the season unbeaten,” commented Cavaliers coach Robert Banks.

“This was definitely our toughest test, playing against a strong Newcastle side who just would not quit and pressured us like no-one else has this season. I look forward to hopefully playing them next season.”

Despite Lemons’ late heroics, Newcastle fell at the final hurdle but coach Ian Hewitt had nothing but praise for his side.

“We competed and fought,” he said. “In the second quarter, our defence was too relaxed and we let Thames Valley enjoy the open looks and lanes to the basket and honestly we were not ourselves.

“But we dug deep and never quit. We clawed it back to two points but it wasn’t to be. It’s been a great season, a successful one and we move on now.”