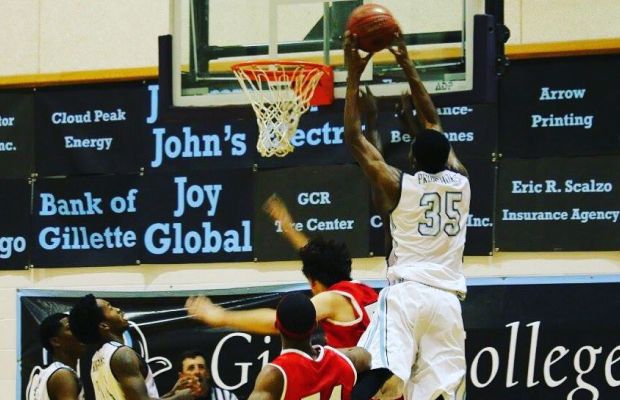 Kavell Bigby-Williams is having fun out in the States having posted two triple-doubles in his first four games of the JUCO season in Division 1.

The 6’9″ forward is in his second year at Gillette College and currently averages 16.8 points and 13.8 rebounds per game as well as having the most blocks (31) in the NJCAA so far.

“I’m feeling good right now,” he told Hoopsfix. “I’m in good rhythm and playing well – I’m just trying to lead the team and be as aggressive as I can to help us win.”

Bigby-Williams hit the ground running with 21 points (9-14 FG), 12 rebounds and an impressive 10 blocks for a stellar stat-line in a 76-55 win against Dawson Community College. That was followed by 21 points and 20 rebounds in a performance that also included five blocks and five steals.

This past weekend, Bigby-Williams showed no signs of letting up after going for 12 points, 10 rebounds and 11 blocks for another triple-double in a 96-69 win over Laramie County, who have freshman Ola Ayodele on their roster.

The former Harris Academy Beckenham player also had 13 points, 12 rebounds and five blocks in another win for Gillette as they start the season 4-0.

Dwayne Orija, who was part of Kent Crusaders’ playoff winning roster last season, is also at Gillette alongside KBW in his freshman year and is currently averaging 4.5 points and 1.8 rebounds.

Bigby-Williams has history of posting triple-doubles. Check him out in action against Barking Abbey below:

Bigby-Williams represented the GB Under-20’s at the European Championships for the second year in a row this summer and averaged a double-double with 11.7 points and 10.1 rebounds per game in the tournament.

He had 91 rebounds in this years’ U20 European Championships – the most by a GB player in 10 years (stats/history here).

Check out our ultimate list of British players in the US College system here.