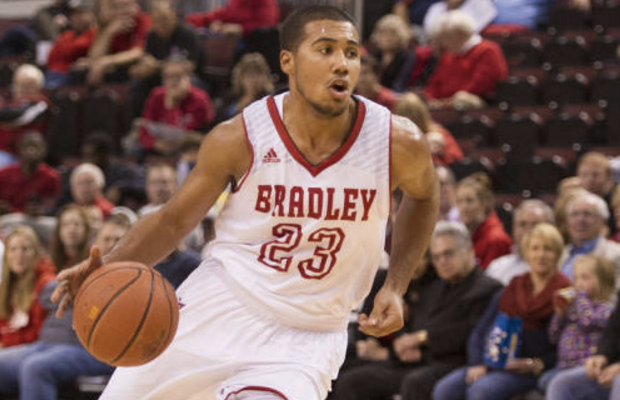 With the college basketball season now started, it’s time to begin our weekly round-up, looking at how Brits are getting on in NCAA Division 1.

DLO made an impressive start to his college career with Bradley Braves after starring in their opening 54-53 win against Ball State. The GB U20 guard scored a game-high 18 points with half of those coming from the free throw line, whilst also adding eight rebounds.

“We didn’t play too well today,” he said via PJStar. “We can play better. But honestly, this was almost like a dream come true. This was our first regular-season college game and we got a win. We were almost underdogs the whole game even though we were at home. We fought the whole game. So we’re just happy.”

In his second game, Lautier-Ogunleye had six points and dished out five assists in a 60-90 defeat on the road at Arizona before scoring eight in a 57-82 loss against Virginia to start Gildan Charleston Classic. His opening performance against Ball State earned him the Missouri Valley Conference (MVC) Newcomer of the Week award as well as praise from the opposition coach.

“The one guy on their team that stood out to me was Ogunleye,” said Ball State coach James Whitford. “They moved him to point guard and he was in an attack mode. He was able to get to the free-throw line 15 times and that was the difference in the game.”

Luke Nelson led UC Irvine to a 3-0 start on Wednesday after scoring 22 points and adding six assists to help his side to a 61-60 success in overtime, against UCF. The junior guard had scored 10 points in the season-opening 89-73 win over UC San Diego and also had an all-round display consisting of 12 points, five assists, four rebounds as well as four steals in another home victory as the Anteaters defeated Loyola 77-53.

Meanwhile, Alex Young has also made a solid start for UC Irvine having scored seven points in each of the first two wins, before hitting double figures for the first time in the overtime victory in mid-week. The orchestrator, now in his senior year, also came up with 14 assists over the first three games.

Another senior guard, Teddy Okereafor, who made his GB Senior debut alongside Young in the summer, began the college season with seven points, six rebounds and five assists in a 56-64 defeat at home to Princeton before going 1-of-6 from the field as the Broncs fell to a 0-2 start on Tuesday, losing 73-60 at La Salle.

It’s been a tough start for Seattle University as they dropped their opening three games this week. Jack Crook began his senior year with a team-high 11 points in a 56-58 home loss, before posting a double-double of 10 points and 10 rebounds as his side were beaten 65-77 at home to Sacramento State.

Fellow Brit, Aaron Menzies had six points on 3-of-5 FG shooting and a team-high eight rebounds in the Redhawks’ most recent defeat, while Crook recorded 10 points, four rebounds and five assists.

There are also a pair of Brits at Western Kentucky with freshman, and GB U20 centre Nathan Smith joining fellow big-man Ben Lawson at the Hilltoppers. Lawson scored 13 points in 14 minutes in an opening 97-77 victory over Campbellsville after going 5-of-7 from the field before WKU suffered a 90-85 loss at Belmont on Wednesday.

Elsewhere, senior forward Jesse Chuku scored 19 points including five triples and added nine rebounds, two steals and two blocks in a 98-89 defeat for Lehigh in their second game, having had eight points and eight boards in their opening 57-47 loss.

Josh Steel made his college debut with Duquesne and scored a 3-pointer in a 96-71 win against Seton Hill, before going 3-of-3 from the field including both of his attempts from downtown in an eight-point display in 12 minutes of his side’s following 95-75 victory over New Orleans.

Karolis Kundrotas – another freshman from Kent Crusaders’ play-off winning squad – made his debut for Eton with four points and three boards in an 85-71 win on the road at Charlotte, before his side split their next two, losing against Michigan and beating Belmont Abbey.

Also, Kingsley Okoroh had two points, three rebounds and two blocks in seven minutes of California Berkeley’s 97-65 win over Rice, prior to an 85-67 win against UC Santa Barbara. Samson Oyediran made his debut with Tennessee State in their third game of the season and recorded five points and five rebounds as they defeated Fisk 72-50 to go to 2-1 for the opening week.

Ryan Martin had a solid start with Tennessee Tech with the senior forward scoring 10 points in an opening 110-72 victory against Piedmont College before the Golden Eagles dropped their next two encounters.

Meanwhile, Prince Ibeh had started and contributed five points in a 95-61 exhibition victory for Texas before playing the season-opener with the Longhorns in Shanghai, China as they suffered a 71-77 loss against the University of Washington.

Check out the full list of Brits in the US Collegiate system, here.