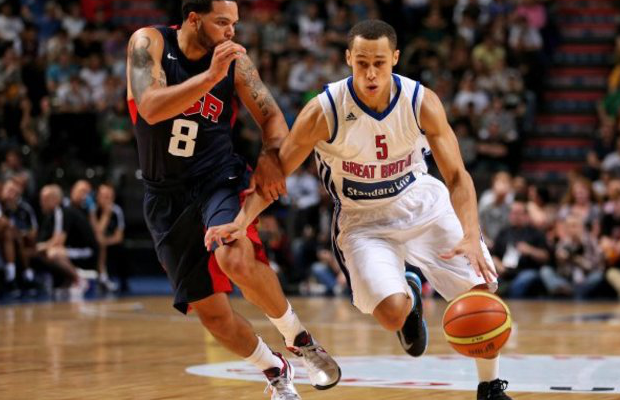 Andrew Lawrence made his long-awaited competitive return from injury as he scored 16 points to lead Gipuzkoa in their opening 97-64 defeat, in Spain’s top-flight Liga Endesa. In the same league, Dan Clark started the season in with 6 points in 17 minutes as Andorra suffered a 79-69 defeat.

It’s been a long time, but worth the wait!! Game day pic.twitter.com/bQo8r2yhmE

Ovie Soko led Trikala to a season-opening win in the Greek A1 league after finishing with 14 points, 12 rebounds and three steals in a 73-64 road win. Fellow Brit, and team-mate, Justin Robinson also played a key role after contributing 10 points as well as six rebounds and six assists. Devon van Oostrum also started his season in Greece and had six points and five assists in a narrow 68-66 defeat for Arkadikos.

Will Ohuaregbe produced a strong double-double in the Pro-A division after posting 12 points and 14 rebounds as well as three assists in an 89-81 loss for the Dragons, in what was their third loss from four games.

Myles Hesson was named JDA Dijon’s MVP in their 70-66 road win at the weekend after a 15-point display was boosted by six rebounds and three assists. The GB Senior forward recorded two points, four rebounds and four assists in an all-round effort in his side’s 89-69 win in mid-week and Dijon are now top of the French Pro-A with an unbeaten 3-0 start.

In Spanish LEB Gold action, Ben Mockford went 3-5 from 3-point range in his 13 points to help Caceres to a 79-75 win as they maintained their unbeaten start to the season. A division below in LEB Silver, Mo Soluade finished with five points, three assists and two assists as Clinicas Rincon fell to a 69-61 loss. Ali Fraser made his season debut with five points and six rebounds in an 83-78 overtime defeat for Tarragona.

Experienced guard Ogo Adegboye scored 18 points including a perfect 5-5 from 3-point range but Vanoli Cremona dropped to an 0-2 mark in Serie A after an 83-76 loss. Ashley Hamilton continued his good start in Serie A2’s East division, although his 24 points and 10 rebounds were not enough to give Olimpia Matera their second win as they were beaten 103-87 on the road. Will Saunders chimed in with 11 points to help Novipiu Casale go 2-0 in the West division after recording a 75-62 win at Angelico Biella.

Shore Adenekan scored 10 points on 5-8 FG shooting in Slovakia, whilst adding six rebounds as Iskra Svit suffered a 69-65 defeat in mid-week. Meanwhile, Liam Potter had six points and six boards in Denmark with Svendborg claiming a narrow 90-88 victory at the weekend to improve to 2-1.

In the Netherlands, Nigel van Oostrum scored six points in 14 minutes in a 73-65 loss for Leeuwarden as an injury limited him to first-half action.

Notes: Joel Freeland remains injured currently, and is yet to make his competitive debut for CSKA Moscow, while rookie Christian Behrens has been released by Austrian side Wels.