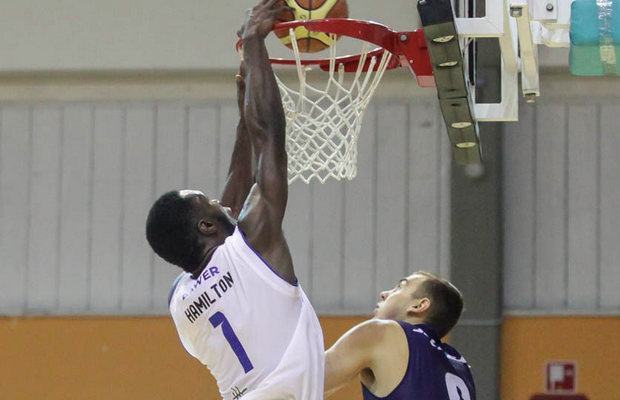 With the majority of European leagues now up and running, our Brits Abroad round-up is back as we check out the best British ballers flying the flag overseas.

Myles Hesson made his debut in the French Pro-A with Dijon and the GB forward went 5-7 from inside the arc on his way to 14 points in an opening 87-68 home win over Orleans. Hesson also added three rebounds and an assist in his 23-minute display.

Eric Boateng posted a double-double of 10 points and 12 boards to help Blois to a comfortable 86-64 victory in their second game in the NM1 division. The experienced centre is suiting up alongside former BBL MVP Zaire Taylor in the French third tier.

In Italy, Ogo Adegboye contributed three rebounds and three assists in 18 minutes off the bench as Vanoli Cremona lost their Serie A opener, 97-90 in overtime. The experienced guard has secured a contract with the top-flight side until the end of November after impressing in pre-season.

Will Saunders scored five points on his pro debut in Serie A2 as his new side Novipiu Junior Casale edged their way to a 61-60 win to start the league campaign. In the same division, Ashley Hamilton (pictured) also enjoyed a winning start to the season as he led Bawer Matera to an 85-73 win in their first game with a team-high 21 points.

Gabe Olaseni was another player to enjoy a successful start to his pro career after scoring four points and adding seven rebounds in 18 minutes of Brose Baskets’ 79-63 win in their first German BBL game. Liam Carpenter is at Crailsheim in the same league this season, but did not feature in their opening 91-89 victory. Also out in Germany is Will Ohuaregbe and he recorded eight points and seven rebounds in a 79-67 loss for the Dragons in their Pro-A opener.

In Spain, Ben Mockford scored all of his nine points from 3-point range as Caceres edged their way to an 87-85 win in LEB Gold having been promoted last season. In LEB Silver, summer GB Senior debutant Joe Hart scored six points, going 2-4 from beyond the arc, whilst adding three rebounds in an opening 77-73 triumph for Araberri. GB U20 guard Mo Soluade finished with nine points, five assists, three rebounds and two steals in Clinicas Rincon’s 69-62 overtime victory.

Christian Behrens, a new face in the GB Senior set-up despite not yet making his debut, is another rookie this season and he is four games into the Austrian Bundesliga campaign. At the weekend, Behrens scored five points in an 81-75 defeat for Wels (0-4) as they remain bottom of the league.

Shore Adenekan also made his pro debut in Slovakia as new side Iskra Svit suffered a 99-72 defeat on the road. The Seattle University graduate finished with seven points and four rebounds in the loss.

In Greece, Fahro Alihodzic scored seven points as Promitheas Patras began their A2 campaign with an 82-66 victory. Meanwhile, former GB big man Liam Potter made his return from a lengthy injury absence as he played limited minutes in an opening win for Svenborg in Denmark.

The likes of Dan Clark, Andrew Lawrence, Devon van Oostrum, Ovie Soko and Justin Robinson all start their 2015-16 seasons this week as the Liga Endesa begins in Spain as does the A1 league in Greece. Meanwhile, Joel Freeland, who has left the NBA to join Russian giants CSKA Moscow, is facing a spell on the sidelines through injury.

Ryan Richards is available again after his season in China came to an end. In 11 NBL games, the San Antonio draftee averaged an impressive 24.6 points and 13 rebounds per game in a spell that included a career-high 45 point-haul.

Check back every Tuesday for our Brits Abroad round-up!