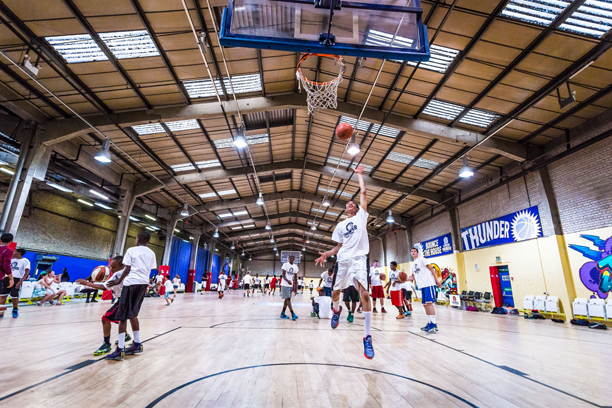 London Thunder have become one of the only clubs in London with their own facility after renovation on an old warehouse has been completed to provide a two court space they share with a local table tennis club.

The venue has been transformed over the past two years (picture below right from March 2013) from an empty warehouse to having two full size wooden sprung floor basketball courts, changing rooms, a classroom, seating and a snack area, following a partnership with the Surrey Canal Sports Foundation.

The club, set up in 2006 by British basketball legend Steve Bucknall, has recently undergone a re-brand from Lewisham to London Thunder and engages with over 1000 people aged 18-25 per year. They have over 8 teams, including a women’s team and a wheelchair basketball team. 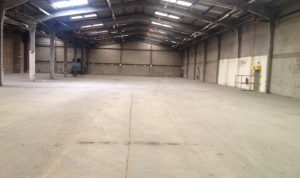 “We were scrimping and scraping, hiring out facilities, and 3-4 years ago I looked at it and said this is not the way. We didn’t have any flexibility on times or the amount of time we wanted, so you need your own facility,” Bucknall said in his podcast interview with Hoopsfix.

“One of the mothers said there’s so many warehouses abandoned, couldn’t you turn one of those places into the gym? I said ‘yeah but who’s gonna pay for that, who’s gonna back that?’. Funnily enough, a year later we were approached by the Surrey Canal Sports Foundation in terms of their regeneration project and they really wanted to build up the awareness of basketball in the particular part of the borough where we’ve ended up.

“..It costs a lot but we can utilise this to touch a lot of lives, a lot of young peoples’ lives can be changed.”

Bucknall estimates it has cost approximately £150,000, and meant the club moving from one side of the borough to the other, but says it is worth it, giving the club more practice time, better players because of increased contact hours, and attracting more volunteers and coaches.