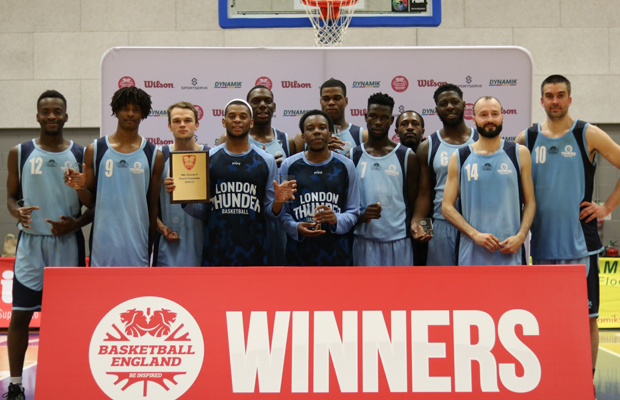 London Thunder Lewisham claimed the 2019 Division 4 Playoffs title with an 88-71 win over Bristol Hurricanes on Saturday afternoon at the NBPC in Manchester.

A dominant second quarter gave Lewisham control and they wouldn’t look back, leading by double digits the entire second half.

Great Britain junior international Josh Uduje picked up MVP honours on his birhtday, going 6-of-11 from three point range on his way to 24 points.

Alberto Ortiz had 18 points, 10 rebounds 6 assists, and 3 steals, whilst Dwayne Camille had 14 points and TJ Hibbert 13 points in just 15 minutes for Thunder.

“It’s fantastic to get a win here at the Playoff Finals in Division 4,” London Thunder Lewisham Coach Andrew McKella commented, after his side finished 12-6 in the regular season.

“It’s unbelievable. If you saw where we started at the beginning of the season, to where we finished up, we just progressed and grew throughout the season and this is just validation of the work the whole team has done this year.”

Bristol were led by 16 points, 9 rebounds and 9 assists from Benas Andriekus, with another 16 from Zygimantas Kosarevas.

“It was a tough game for us. We started well, Lewisham played quite physically and we didn’t always match that. Then from there, we got lower, across the squad, and they made some really good shots. It looked like we could make it back, but they kept making shots, so yeah, tough game.”