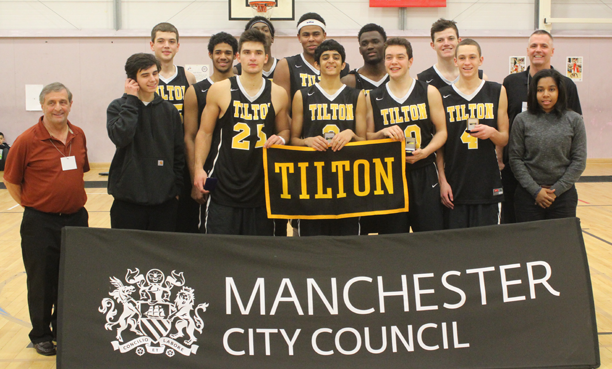 Tilton Prep picked up the 2014 Haris Memorial Tournament title after defeating fellow US Prep School St Andrew’s 121-97 in the final on Monday evening at the Amaechi Basketball Centre in Manchester.

Tilton proved too much for St Andrew’s, who compete in the same league with them in the US. Both teams came into the final undefeated in the tournament, but behind standout performances from tournament leading scorer Franklin Porter, who had 31 points, and MVP Terance Mann(27 points, 13 rebounds, and 8 assists), St Andrew’s could never get in the game.

Tilton jumped out to a 10 point lead in the first few minutes, extending it to 16 by the end of the first quarter, 19 at half time and 28 after the third. The fourth quarter was a mere formality as Tilton finished 4-0 in their first outing at Haris.

“It’s been a great experience,” said Tilton Head Coach Marcus O’Neil. “We love being over here, seeing Manchester’s been great and we appreciate being a part of the Haris Tournament.

“I think we played pretty well, we’ve had to adjust to the officiating but we shot the ball well early. Both teams are fatigued and we kind of just got on a roll. It’s been a good tournament for us; we had to play well to win the tournament.”

St Andrew’s were led by the backcourt of JR Lynch and Brian Mukasa. Lynch had 22 points and 4 assists, while Mukasa finished with 15 points and 3 assists. Chancellor Ellis, who had been one of the dominant players in the tournament with his three point shooting, struggled to get going.

St Andrew’s will look for revenge when the two sides meet later in the regular season back across the pond. O’Neil added he doesn’t expect it to be as easy.

“It’ll be a different game because the officiating is different in America,” he said.

“They’re as capable of shooting the ball really well, they’re an excellent 3 point shooting team, they play really fast they’re always a good defensive team and they offensive rebound pretty well. I don’t think this will have anything to do when we play them again later, it’ll be a completely different game and hopefully we can survive.

“It’s always hard to beat a team twice, especially a good team like them.”

Boulazac were playing without star big man Joshua Norbal, who was named to the all-tournament team, and England capitalised, jumping out to an early lead that they wouldn’t give up the rest of the way.

“Never happy with third, but I’m happy with the tournament and the competition we played against,” said England U18 Head Coach Karl Brown.

“We’ve improved, the key thing is about ‘team’ and they’re gelling well as a team. They’re having a lot of input into what’s going on and that’s something that’s good and showing on the floor. They’re communicating well and playing well with each other.”

Tilton vs Boulazac (semi-final)
Tilton got a comfortable 92-71 win over Boulazac to progress to the final and set up a meeting with St Andrew’s.

Franklin Porter and Terance Mann had 25 points each to lead Tilton, with Anthony Green and Brett Hanson finishing with 11 and 10 respectively.

St Andrew’s vs England U18s (semi-final)
St Andrew’s survived a last gasp attempt from England to win 110-107 and head to the final.

Luke Mitchell’s three point attempt at the buzzer that would have forced overtime bounced off the back of the rim as St Andrew’s set up a final match-up with Tilton Prep.

“The result came down to one play, but I think it was the whole game,” Karl Brown said.

“It showed us the style of game from an American prep school and we competed. To score that many points against a quality team and for it to come down to a couple of plays, for me it’s good and for the players it gave them a lot of confidence.”

Carl Wheatle had his breakout game of the tournament, dominating at times on his way to 28 points, Alex Roberts had 20 points while coming up huge down the stretch, with 5 points in the dying moments and Kyle Carey had 19.

Chancellor Ellis hit six threes for 20 points, but Aaron Wheeler led St Andre’ws with 25, while Brian Mukasa and Eric D’Aguanna had 21 each.

Joe Swindells got fouled on a three point attempt with 0.4 seconds remaining in regulation and knocked down all three free throws to force OT tied at 72.

In the first OT both teams struggled to find the bottom of the hoop, scoring 4 baskets between them, while Cornella managed to get a cushion in the second OT and grind out a win.

Raheem Idris had the highest outing of the tournament with 35 points for Manchester, Swindells finished with 14 while Ayo Nue had 12.

England U16s picked up their first win of the tournament with a huge 60-51 comeback win over Sligo to secure seventh place.

Down 24-6 after the opening period, and 17 at halftime, England managed to reduce the deficit to six heading into the final period where they dominated for a 9 point win.

“We went down 18 points very early on. One game too many was what I am sure everyone was thinking however we can’t allow ourselves to develop that mindset,” said England U16 Head Coach Alan Keane.

“Nine games and 11 practices in 12 days at the Euros is what we are preparing for. With that in mind we started all over again at half time and refocused. To come from behind and win by 9 showed me we have a lot of potential and a desire to fight until the end.

“Overall the Haris tournament has given me a wonderful opportunity to benchmark where we are as a team and allowed the players to show me more of what they are currently capable of and what their potential could be moving forward.

“I am very excited to work with this group and feel very positive about the developments we are making. Sincere thanks to Manchester Magic for hosting us, once again they showed why they are a cut above the rest.”

Jacob Iwowo led England with 15 points, while sharp shooter Jacob Round had 8 points, and Josh Edwards and Tariq Balogun added 8 each.

Manchester vs England U16s
Manchester U18s survived a near upset from England U16s with a 77-71 victory to book their place in the fifth place playoff.

England held a lead with a little over five minutes to play, but Manchester came through when it mattered, led by Daniel Walters’ 20 points.

“We performed very well in patches however the challenge will always be to extend these positive patches of play,” said England U16 Head Coach Alan Keane.

“We led throughout the opening three periods which helped build the confidence of our players. However a very talented and well coached Manchester team found a way to close out the game.”

Joe Swindells and Raheem Idris added 13 each for Manchester, while Josh Edwards led England with 18.

Jacob Iwowo had 15, while Zion Tordoff and Richard Amaefule added 8 each for England.

CB Cornella vs Sligo
CB Cornella’s Jaume Lobo hit a three pointer with 5 seconds remaining for a 76-75 victory over Sligo and a chance to play for fifth place.

Cian Lally had 28 to lead Sligo, with Philip Hamilton and Tobi Brockmann addeding 17 and 16 respectively. 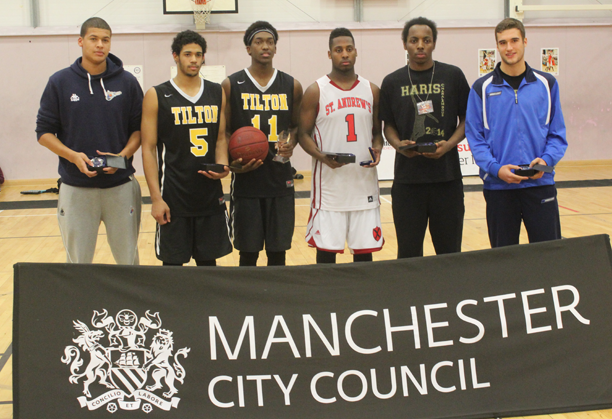 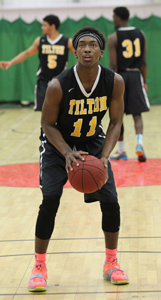 Tilton Prep’s Terance Mann was named the deserved MVP of the tournament, saving his best game to last with a near triple double in the final vs St Andrew’s.

The silky smooth 6’5″ guard had 27 points, 13 rebounds and 8 assists in the final and dominated throughout, while scoring the 1000th point of his career with Tilton.

“Terance is a great all around player, he’s a tremendous athlete,” his Coach, Marcus O’Neil said after he won the award.

“We play him at the point, he’s played every position for us in the three years he’s been with us so it’s nice when you have a star that’s a great defensive player and such an unselfish offensive player. He definitely makes the team go.”

Mann, who is nationally ranked 82nd in the Class of 2015 by ESPN, has signed with Florida State for next season.

Related ItemsEngland Under-16sEngland Under-18sHaris Memorial Tournament
← Previous Story Denzel Ubiaro Shuts Down the Haris Tournament! Back to Back Posters on the Break!
Next Story → Hoopsfix Review of 2014: April-June