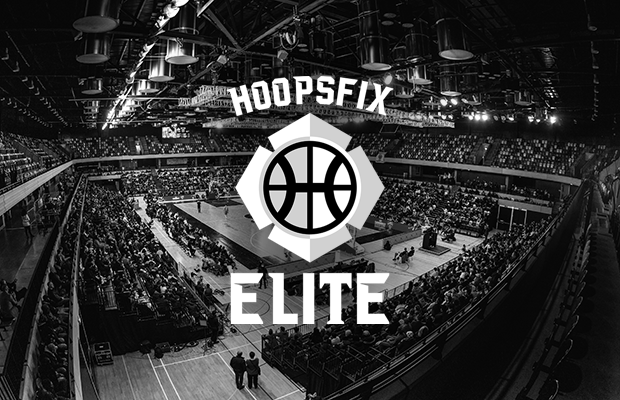 Fourteen players have been named to the Hoopsfix Elite roster heading into training camp next week as they prepare for a marquee clash against California Basketball Club on Thursday at the Copper Box Arena (8pm, ESPNU – tickets still available).

The roster is headlined by Quinn Ellis, who returns to the UK after signing a four year deal with Italian Eurocup side Trento, Michael Belle who crosses the channel from France where he plays for SIG Strasbourg, and Sultan Adewale, back from the US and fresh off an all-state season with Neumann-Goretti High School in the US.

Joining that trio is versatile London Lions guard Brandon Tchouya, preparing to head to Laramie County Community College next season and Stephen Ovia who has just competed a season at The Phelps School in the US. Athletic 6’9″ big man Clemson Edomwonyin joins the team to man the middle, helping CoLA to an Under-18 Final Fours appearance this season.

Southwark Legends duo Tijan Barrie – one of the top Under-16 prospects in the country last season – and Myles Hosten – who currently attends Bishop Walsh High School are both included in the squad, while six Great Britain Under-18 squads will fly back from Turkey at the European Championships on Monday to join camp.

Manchester Magic’s Ben Brown – fresh off a strong showing at the NBA Academy Games will provide strength at the guard spot, along with First Baptist Academy’s Latrell Davis, fresh off a 32-point outing against Czech Republic on Thursday.

Additional firepower in the backcourt is added with Reading Rockets point guard Isaac Round and Seneca High School’s Louie Tucker – originally out of Bristol, plus Matthew Goodwin, another Manchester Magic representative, who was dominant at the Junior Final Fours this season.

Ipswich’s versatile forward Ben Michaels bolsters the frontcourt, also coming off an NBA Academy Games selection and is one of five Hoopsfix All Star-Classic selections on the roster.

“I’m pleased with the level of talent we’ve managed to assemble on the roster,” said Head Coach Lloyd Gardner.

“We’ll have our work cut out over the course of a four day camp to prepare for a tough match-up against California Basketball Club and we’re throwing our guys in at the deep end with a game against Montana State University tonight.”

12 of the 14 players will be selected for the final roster to play against California Basketball Club on Thursday. Quinn Ellis joins the team for camp on Tuesday, while Belle arrives from France on Wednesday, so the team against Montana State University will be supplemented by a pair of professionals.

Meanwhile, California Basketball Club – whose players are from Sierra Canyon High School – are led by Bronny James, the son of LeBron James, the number 39 prospect in the Class of 2023, and no. 2 junior in the nation Isaiah Elohim.

You can sign up to the waiting list for the game against Montana State University are available here as it has already sold out, while limited tickets remain for the match-up with California Basketball Club here – which is set to be the largest ever crowd for a junior basketball game in the UK.