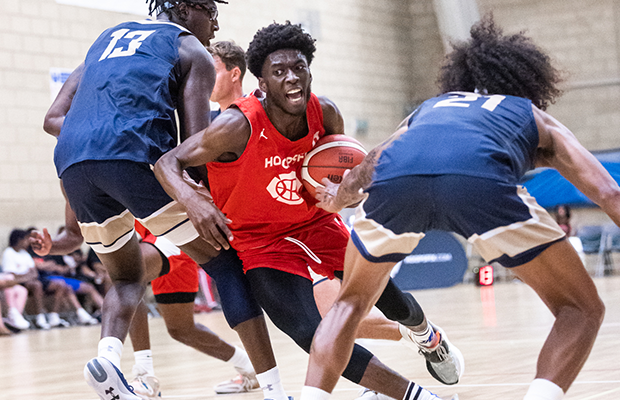 Hoopsfix Elite fell to a heavy 94-49 defeat at the hands of Montana State University in their opening competitive action on Monday evening at Barking Abbey in East London.

Having opened training camp just two hours before the game, it was a baptism by fire for the squad who are awaiting the arrival of Quinn Ellis and Michael Belle, and called up pros Elvisi Dusha and Kayne Henry for additional support.

Montana State unleashed a 3-point barrage, knocking down 14 triples, while holding Hoopsfix to 25% shooting from the field including 2/25 from beyond the arc, and benefiting from 24 Hoopsfix turnovers.

Freshman Jed Miller led Montana State with 16 points, and Nick Gazelas had 9, as all 13 players scored at least four points.

Hoopsfix now have three more practices to prepare for California Basketball Club on Thursday evening at 8pm at the Copper Box, broadcast live on ESPN U; limited tickets remain for the match-up here – which is set to be the largest ever crowd for a junior basketball game in the UK.