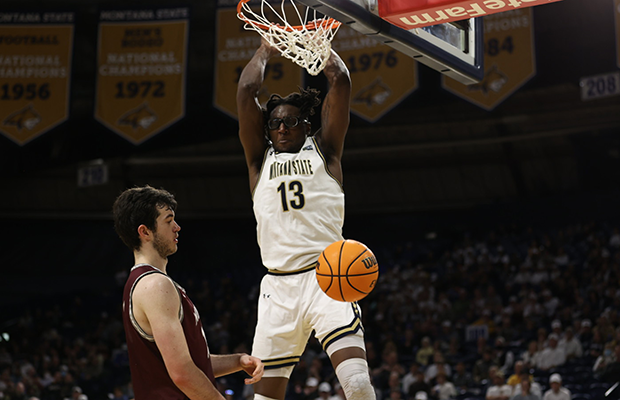 Montana State University embark on their European tour this week, landing in London to take on a Barking Abbey London Lions select squad on Sunday and Hoopsfix Elite on Monday evening.

MSU, who are fresh off a conference title and NCAA tournament appearance, include a trio of Brits in Jubrile Belo, Great Osobor, and Caleb Fuller. Belo won Big Sky Conference MVP and Defensive Player of the Year last season.

The 6’8″ Osobor heads into his Sophomore year, while Fuller joins the Bobcats as a transfer after four years at UC Davis. Meanwhile, they also feature assistant coach Chris Haslam, a former GB international.

BA London Lions will be putting together a select squad in similar fashion to the team that played Wake Forest on Thursday night, but includes the addition of Amin Adamu – who has just graduated from Montana State, along with Shaquille Walters, who is heading into his rookie year after finishing at Northeastern.

Register for free tickets for the BA vs MSU game here, set for tip off at 2pm on Sunday.

Hoopsfix Elite will be opening their training camp on Monday shortly before the game, as they open preparations for their game against California Basketball Club on Thursday at the Copper Box (8pm on ESPNU – tickets still available here). The Hoopsfix Elite squad may be supplemented with a couple of professionals.

Register for free tickets for the Hoopsfix Elite vs MSU game here, as it will tip at 7pm on Monday.

For media credentials requests, please fill out this form.