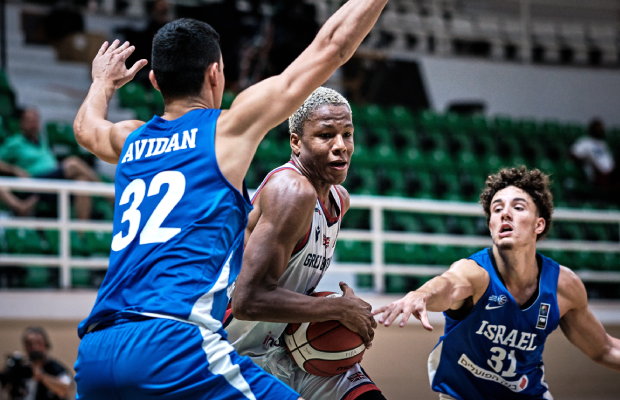 GB Under-18 Men suffered another heavy loss at the FIBA U18 European Championship after falling to an 89-61 defeat against Israel, on Sunday afternoon.

Craig Nicol’s side will next take on North Macedonia in their final Group A game on Monday in the battle for third spot as teams compete for seeding in the Round of 16 stage.

Latrell Davis top scored with 15 points with Ben Brown also in double figures with 10 points, while Lane Campbell collected 11 rebounds to go with nine points in the defeat.

Israel were off to an 11-4 start before a tough and-1 from Ben Michaels out of the timeout stopped the rot. Joe Buchanan and Davis both hit triples to cut the gap to just two points, but an 8-2 close put Israel 24-16 ahead after 10 minutes.

Brown netted a three in between a pair of outside shots from Israel as the gap began to grow out of control with a further 13-0 run ensued. GB struggled to contain their opponents with Louie Tucker adding a triple inside the final minute with his side at 21% from beyond the arc, whilst giving up 15 turnovers to trail 54-28 at the half.

Another three from Brown halted a three-minute scoring drought for GB as their deficit had grown to 37 points. Campbell made plays at both ends of the floor in a bright spell for GB as they would still be 74-39 behind at the end of the quarter.

Nedas Cholevinskas fired in a three to start the fourth before Dara Adeyemi joined him on the scoresheet with a first basket inside. The result was already beyond doubt, but GB enjoyed a strong finish as Davis knocked down back-to-back threes in the final minute to take the quarter 22-15.

– GB’s starters: Davis, Brown, Round, Michaels & Chloevinskas
– GB were beaten 97-45 by France in their opening game on Saturday
– GB finished with 31% shooting – including 10-of-39 from three-point range
– GB’s 28 turnovers were converted into 42 points for Israel
– Their next game is against North Macedonia on Monday at 11:45am