Vanessa Ellis and Karen Burton selected as Under-19 Women coaches at #HASC22 - Hoopsfix.com 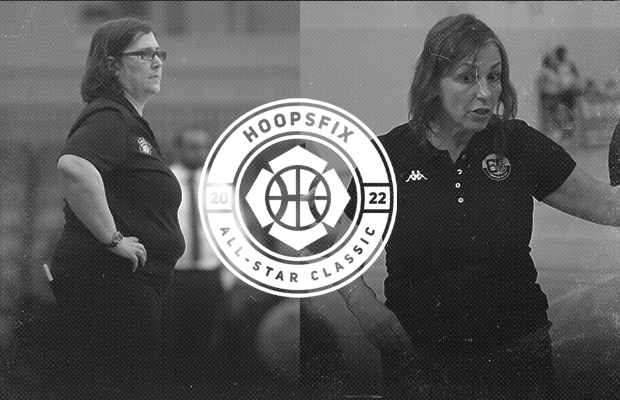 Vanessa Ellis and Karen Burton will head up the two teams in the Under-19 Women’s game at the 2022 Hoopsfix All-Star Classic, taking place on Saturday May 28th at Crystal Palace.

The duo have decades of coaching experience between them having both been heavily involved in the national teams setup at senior and junior level. Ellis will lead Team Black with Burton in charge of Team White.

Tickets are still available and can be bought here for the event, which is sponsored by Foot Locker, Jordan, Sportserve, Molten, 5or6, Always Ballin’ and Red Bull.

Ellis made over 50 caps for England as a player with 30+ trophies with Sheffield Hatters before becoming head coach of the club in 2000 and winning more pieces of silverware including a treble during the inaugural WBBL season.

The Hatters legend has been a GB Senior Women assistant for 11 years – including during the Olympics – and helped England win a silver medal at the 2018 Commonwealth Games as well as been head coach of GB Under-20 and Under-18 teams.

“I am pleased and excited to be coaching at the Hoopsfix All-Star Classic,” said Ellis. “I am looking forward to be working with the young British stars of the game. As the GB assistant coach, it will be great to see and get to know the players up close, both on-and-off court.

“These are the future of our game. I can’t wait for the competition and to have fun at this great event.”

Ellis will also have a keen eye on the Under-19 Men’s game as her son Quinn Ellis suits up for another HASC appearance.

Meanwhile, Burton has a long history with the Nottingham Wildcats programme dating back to the 1980s as a player before transitioning into coaching. In 2013, Burton made the move south to join up with Barking Abbey; winning the WEABL Coach of the Year award five years later.

Burton returned to Nottingham to head up the University programme as well as become the WBBL assistant, whilst previously spending six consecutive summers as England Under-16 Women head coach and coaching at each age group level for GB – and will be one of the Under-18 assistants this summer.

“I am delighted to be asked to take part in a game like this with so much talent on show,” said Burton. “It’s such an amazing opportunity that Hoopsfix and everyone else that has made this event possible, to have given the players the platform to showcase their talents in front of family friends and people that are here to just support basketball.

“I also want to take this moment to thank you all for continuing to support the women’s game by making this game an all-women event.”

Ellis and Burton become the first female coaches at the event with the Under-19 Women’s game taking place for the third time since its inception three years ago.

Jackson Gibbons and Nick Drane were the head coaches for the inaugural contest in 2019 before Krumesh Patel and Kenrick Liburd were chosen in 2021 as the Classic returned after a year’s hiatus.