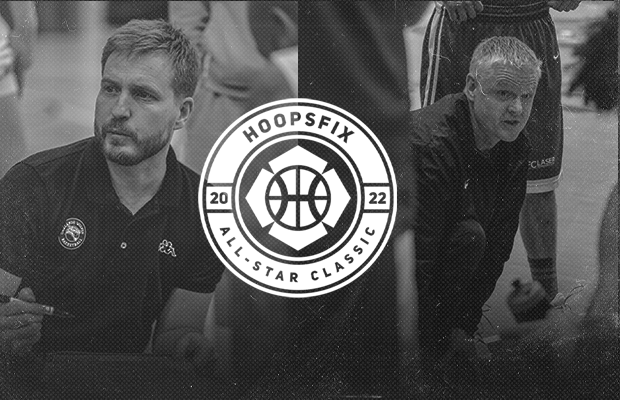 Matt Shaw and Lee Ryan will go head-to-head on the sidelines after being announced as the head coaches for the Under-19 Men’s game at the 2022 Hoopsfix All-Star Classic, taking place on Saturday May 28th at Crystal Palace National Sports Centre.

Two coaches that have enjoyed success at junior and senior level become the latest to take part in the event with Shaw heading up Team White with Ryan in control of Team Black.

Tickets are still available and can be bought here for the event, which is sponsored by Foot Locker, Jordan, Sportserve, Molten, 5or6, Always Ballin’ and Red Bull.

Shaw has been head coach of NBL Division 1 side Derby Trailblazers since 2014; finishing runners-up in back-to-back seasons – named D1 Coach of the Year in 2016 – having won both the D1 and D2 titles as a player. He had success at both basketball and tennis as a student-athlete before taking a Director of Basketball Academy role with West Nottinghamshire College in 2003.

For the past 13 years, Shaw has held a similar role at Noel-Baker Academy and twice been named EABL Coach of the Year, whilst also becoming England Under-17 Men head coach in a four-year spell.

“I’m really excited to be coaching at the Hoopsfix All-Star Classic,” Shaw said. “It’s one of the premier events on the calendar each year for youth basketball in this country, so to get the chance to coach some top talent is something I’m looking forward to.

“You only need to look at players that have played in the event previously and what they’ve gone on to do and achieve to realise what a great event it is and how it does bring together so many talented, excellent, hard working young basketball players together, so I’m excited to be a part of it.”

Ryan has spent over a decade at Oaklands College; leading the EABL side to this season’s Southern Conference regular season title as well as leading the club’s NBL Division 1 side. The Head of Performance was previously head coach of the Oaklands Wolves WBBL outfit from their debut season having started his coaching career at Solent Suns in 2003.

The EABL Southern Conference Coach of the Year has also been involved in the national teams with a long spell as England’s Under-18 Women head coach.

“The rosters are loaded with talent and a great mix of those that dominated EABL this year and high profile guys returning from the states,” said Ryan. “The event is always a great opportunity for the players to showcase their games, so I’m honoured to take the best seat in the house for what will be another must see Hoopsfix All-Star Classic.”