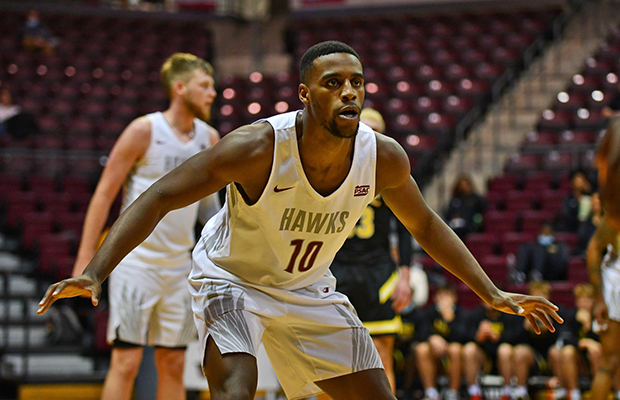 There will be nine Brits representing in the NCAA Division II men’s tournament that tips off this Friday, featuring 64 teams competing for the 2022 NCAA Division II Men’s Basketball Championship.

In their match up earlier this season, Findlay scored an 86-74 win over the then ranked 14th Bulldogs.

Minutes have been hard to come by for the 6’2″ junior guard, seeing three DNPs in the Oilers last 10 games, but scoring 3 points in 6 minutes in their most recent game against Walsh.

First round v St. Thomas Aquinas #7 – Saturday 12th March (7:30pm GMT)
The battle for the East Region of the NCAA Division II Men’s Basketball Tournament kicks-off as Trumper and #2 seed Franklin Pierce University gets set to clash with #7 St. Thomas Aquinas College in the Quarterfinal Round.

Despite losing in the NE10 title game, Franklin Pierce was in a position to qualify for the NCAA Division II Tournament, and did just that, claiming the #2 seed behind host Bentley University.

Trumper has carved himself out a solid role as a starter with FPU in his second year, averaging 6.6 points and 6.5 rebounds per game, in 25.5 minutes per outing.

He had a career-high 18 point outing last week in a win over Pace, going 6-of-8 from the floor.

First round v Fayetteville State #8 – Saturday 12th March (10pm GMT)
After winning a PSAC title and Western Division Rookie of the Year, Sulaiman and IUP (29-2, 20-2 PSAC) opens NCAA tournament play on Saturday when they take on eighth-seeded Fayetteville State (21-8, 12-3 CIAA) in the first round of the Division II Atlantic Region Championship.

The Crimson Hawks are one of three teams in Division II with 2 or fewer losses this season.

Sulaiman has made a huge impact in his first full season at IUP, especially down the stretch when he moved into the starting lineup. In 12 games as a starter, IUP is 12-0 and Sulaiman is averaging 11.3 points and 6.7 rebounds per game, while shooting 60.2 percent from the field with 15 steals and 14 blocks.

First round v Felician #8 – Saturday 12th March (10pm GMT)
Adria Amabilino-Perez and the Bentley University Falcons will be the number one seed and the host team for the 2022 NCAA Division II Men’s Basketball East Regional.

Bentley, 22-4, will be making its first NCAA appearance in six years, playing the number eight seed, 19-9 Felician College, after they won both the NE10 regular season and conference tournament – where they beat Trumper and FPU in the Championship game.

Amabilino-Perez’s season has been a mixed bag, but found his groove in the conference tournament, rounding out the season with 6, 8, 6 and an 11 point performance in the final – after the game he was named the Northeast-10 Elite 24 award winner as the player at the championship site with the highest cumulative grade point average.

He had a season-high 19 points in 23 minutes in December against Assumption.

The first of two British teammates in action with freshman duo Distras and Eze fresh off winning the regular season title with the Vikings. Both have seen limited playing time over the course of the past month or so with Distras’ season-high of nine points coming back in November, while Eze’s best of five points came in the following game.

Augustana had a 17-1 record in conference play on their way to topping the NSIC regular season standings, but suffered defeat in the semi-finals of the post-season tournament. They were still placed as the number 1 seeds as the hosts of the Central Regional and take on Southwestern Oklahoma in their first encounter.

Distras was the 3-point shootout winner at the 2021 Hoopsfix All-Star Classic, while Eze was the runner-up in the dunk contest.

Note: Jordan Spencer won the NCAA DII Tournament with Augustana back in 2016.

First round v UNC Pembroke #4 – Sunday 13th March (12:30am GMT)
Feeney and the No. 25 Flagler College men’s basketball team (21-6) earned an at-large berth and received the No. 5 seed in the NCAA Division II Southeast Regional.

They open play against former Peach Belt Conference rival, the University of North Carolina at Pembroke (26-3).

Flagler closed out the season with a 14-4 record in the PBC. The Saints won two-of-their-final-five games after reeling off nine consecutive wins.

Feeney has struggled to see the floor, not appearing in a game since December when he scored 5 points in a minute.

First round v Millersville #5 – Sunday 13th March (12:30am GMT)
The other duo in the NCAA Division II tournament, Junior Oscar & Ciaran Sandy and Mercyhurst learned on Sunday that they have been named the fourth seed in the NCAA Atlantic Regional Tournament, which will begin Saturday.

After finishing 23-5 overall and 17-5 in conference play in the regular season, they were knocked off in the semi-finals against Millersville – who they will now face in a do-or-die rematch.

Oscar, a Senior guard, has only made six appearances this season, whilst Sandy has made 12, averaging less than 5 minutes per game, with a season-high 6 points in December.