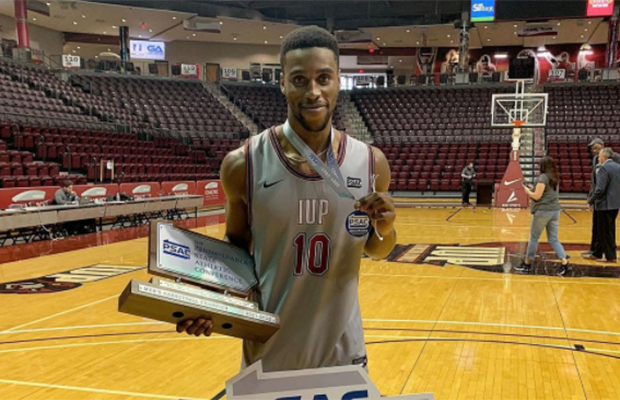 Tomiwa Sulaiman has won the Pennsylvania State Athletic Conference title, along with being named the Western Division Men’s Basketball Rookie of the Year.

The win clinches an automatic bid to the Division II NCAA tournament which will get underway next weekend.

Sulaiman made a huge impact in his first full season at IUP, especially down the stretch when he moved into the starting lineup. In 12 games as a starter, IUP is 12-0 and Sulaiman is averaging 11.3 points and 6.7 rebounds per game, while shooting 60.2 percent from the field with 15 steals and 14 blocks.

He has a season-high 26 points in the February 9 win over Cal, his first double-double of the season with 11 points and 11 rebounds at Edinboro and also scored 18 points against Clarion.

For the season, Sulaiman is averaging 6.9 points and 5.3 rebounds while shooting 57.1 percent from the field and 78.6 percent from the free throw line. He also has 30 steals and 23 blocks and averages 20.6 minutes per game.