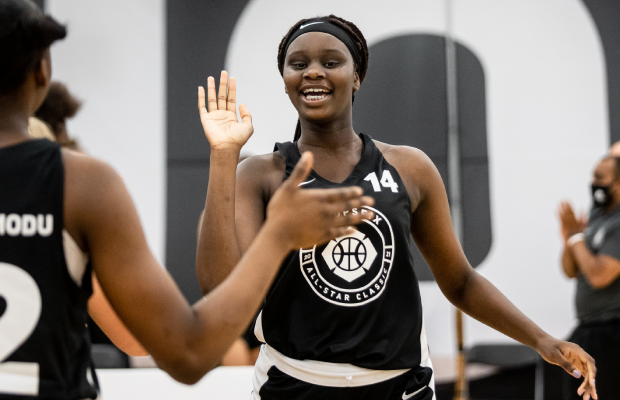 The 2003-born centre is in a second year playing at WNBL Division 1 level with Barking Abbey and becomes the latest prospect to make the move from the successful programme.

“Firstly, I would like to thank my parents for their dedication in my basketball journey,” said Mushore. “I would also like to thank Len Busch at Sevenoaks Suns as well as the the coaching staff at Storm Basketball club and Barking Abbey.

“I am excited to announce that I have committed to UC Irvine. I’m extremely looking forward to playing for their programme and working with all the coaching staff. Also, massive thank you to Hoopsfix for providing the opportunity for me to play in the All-Star Classic last year.”

Mushore has represented Great Britain at junior international level – playing alongside BA teammates Fatmata Jannneh and Neve Marvill for the Under-16s in 2019 – and also competed in the Under-19 Women’s game at last year’s Hoopsfix All-Star Classic.

Mushore previously enjoyed success at Sevenoaks Suns at Under-16 level before making the switch to Barking Abbey in the summer of 2020.