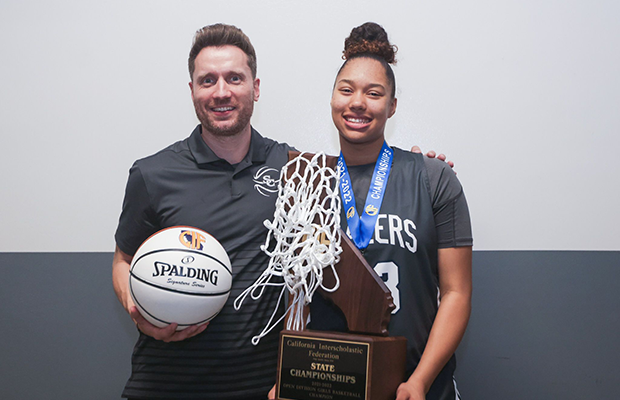 Sierra Canyon – ranked number 3 in the nation – defeated Archbishop Mitty 85-61 in the final of the CIF State Open Division in Sacramento, as Edwards finished with 12 points and 6 rebounds.

The 2006 born forward who played in the Hoopsfix All-Star Classic in 2019 is considered one of the best British prospects in the Class of 2025, having left Barking Abbey in East London for the sunshine coast of Los Angeles ahead of the 2021-22 season.

Vear, formerly part of the England U16 girls coaching staff, was coaching with CoLA Southwark Pride in the UK before joining Sierra Canyon in 2019, and has been one of the biggest proponents of British women’s basketball, running the She’s Got Next recruiting service.

“It’s just an incredible feeling to win a State Championship and I’m so happy for our girls,” Vear told Hoopsfix.

“As a Freshman, Leia has made an immediate impact to our team and came up huge in the biggest game of our season. She is making huge improvements and getting a lot of interest from D1 colleges. We are very excited for her future here at Sierra Canyon.”

Sierra Canyon finish 30-2 on the season, as they made their fifth, and second straight Open Division finals appearance, having won it in their last appearance in 2019. There were no CIF State championships in 2020 or 2021 due to COVID-19.