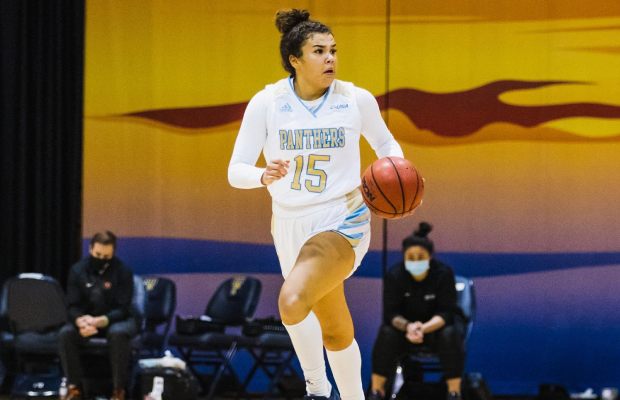 Time to check in again on the leading Brit performers in US colleges as the 2021-22 season continued into the New Year.

Double-double machine Savannah Wilkinson recorded four more to take the season tally to 11 for SMU (9-7), starting with 16 points and 15 rebounds in a big win at TCU. A career-high 17 rebounds came alongside 14 points in a 45-minute effort in an overtime triumph.

Gabby Nikitinaite tallied a third 20-point game of the season for SIUE (9-12) in a loss at Tennessee Tech. Then followed 23 points with 11 rebounds before a second double-double of 15 points and 12 rebounds along with six assists and four steals to earn another Newcomer of the Week award.

Hannah Jump matched a season-high with 21 points against Gonzaga with five triples in a 66-50 win for Stanford (16-3) before repeating the feat to close out January with another 21-point outing against Cal to cap a perfect month.

Khaleah Edwards netted 12 points for SFBK (11-7) against former team Wagner before firing in a season-high 17 points on 5-7 shooting at LIU along with eight rebounds in a 59-53 success having passed the 1000-point mark in college. The graduate student scored another 17 points to close out January with 6-of-10 shooting in 38 minutes, whilst adding four assists in another meeting with Wagner in an 80-69 road win.

The British one-two punch at FIU (11-7) shone further in January with Kyla Nelson firing in 26 points with six triples against Ave Maria, while Emerald Ekpiteta posted 17 points and eight rebounds. Nelson matched the 26-point haul and also had 17 points in 41 minutes against Middle Tennessee in a 56-54 victory.

Loren Christie posted two double-doubles for Buffalo (12-7) with 11 points, 13 rebounds and three blocks against Akron to take their winning streak to five before putting up 11 points and 10 rebounds in 40 minutes in a first start of the season in a tough 70-72 defeat.

CoLA alum Simona Henshaw hit a season-high of eight points during January in 23 minutes off the bench for Florida Atlantic (5-14), whilst also adding three rebounds and two steals. 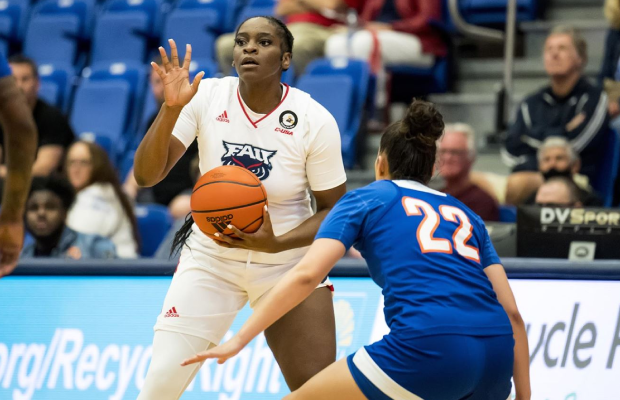 Milly Knowles had a string of solid performances for Eastern Washington (4-15) during a busy month; starting with a near double-double of nine points and 10 rebounds before reaching double figures in points for the third time this season against Portland State in a 68-44 victory. Grace Heeps scored nine points for UAlbany (14-6) as they won seven of nine games in the month.

Amelia Sandie closed the month playing 40 minutes of action with four points, three rebounds and a block as Nicholls State (3-13) fell at HBU. Emma Imevbore made a season debut for Lamar (10-8) and netted four points in six minutes in a second outing, while Megan Jones began the new year with three points for UC Davis (9-7).

Also, Esther Little scored first points for Gonzaga (16-4) in nine minutes of action away at Pacific in a 92-51 victory and Becky Dwomoh scored four points without a miss for Robert Morris (9-10) to top a season-high in a 68-56 victory.

Maya Price continues to have a big season for Eckerd (14-1) with a dominant finish to January in a stretch that included a 23-point haul as well as 18 points against Lynn. The junior then claimed the SSC Player of the Week award after netting 21 points along with seven rebounds and six blocks at Nova Southeastern with Price now shooting at 59% from the field and 42% from three-point range on the season with 15.1 points per game.

Congratulations to Maya Price, who was named the SSC Player of the Week. https://t.co/LIWwK8Zg2s

Dani Lozzi opened up 2022 with a season-high of 15 points for Lynn (7-10) to go with eight rebounds, four assists and six steals in a 23-point win at Rollins. The senior guard then scored 13 points – including 9-of-10 free throws – whilst recording six steals for a third time. Teammate Loie Webb fired in 21 points in an 86-79 win against Barry having been promoted to the starting lineup, whilst also adding four assists.

In that same game, Harriet Swindells scored a season-high 23 points to go with seven rebounds and five assists in the loss having previously netted 22 points against Florida Tech in a three-point triple overtime victory – scoring all six points to seal the win. Ashleigh Pink pulled down nine rebounds in a game on two occasions and had six points against Lynn.

Shauna Harrison enjoyed a return to scoring form with a first game in double figures this season after putting up 20 points in a 62-56 win over Seton Hill. The senior forward also had 14 points, seven rebounds and five assists in the next outing for Cal U (12-3).

Charlotte Ellmore scored 15 points in the first game of 2022 and later set a new season high with 17 points on 6-of-10 shooting in a 40-minute effort at Christian Brothers before posting 14 points and eight assists in a 47-point victory for West Florida (14-5).

There was a game-winner for Sadie Russell for Flagler (10-10) in starting the year with 15 points, eight rebounds and five assists before firing in a season-high of 21 points against USC Aiken. Russell also put up six points, 13 rebounds and six assists during a productive month to take a scoring average into double figures.

Rebecca Morrison reached double figures in scoring on three occasions during January for Caldwell (10-9) with a best of 13 points along with six rebounds at Post, despite a 56-32 defeat to spark a run of four straight losses.

Junior guard Holly Davies started the month with 10 points for Newberry (6-13) and logged heavy minutes during the month, making at least one three-pointer in the final four games. Ella Pearson tied a season best of six points in the following game as minutes on court increased for the freshman.

Alix Henderson had three more double-digit games for Point Loma (11-7) in January with a best of 13 points and also had seven points and seven assists in an 84-65 victory over Hawaii Pacific. Fellow Scot Shawnisay Millar matched a season-high with 15 points on 7-of-11 shooting, whilst also later recording back-to-back games with 12 and 11 points for Midwestern State (10-8).

Sarah Round continued a double-digit scoring streak with a joint season-high of 14 points to start 2022 for Goldey-Beacom (7-11) before adding 13 points in the next outing in an overtime defeat.

Meanwhile, Megan Sheret had six points in two different games for Fresno Pacific (5-7) having returned to the starting lineup for successive games, while fellow BA alum Zoe Willis went 5-of-10 for 10 points for AIC (7-9).