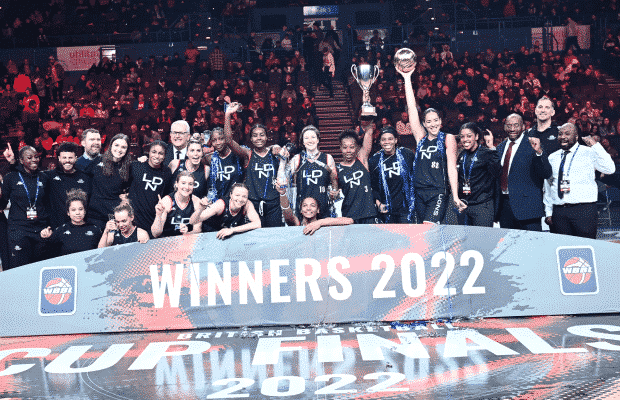 London Lions put together a clinical display to capture the WBBL Cup title with an 87-47 victory over Newcastle Eagles at the Utilita Arena in Birmingham, on Sunday.

Mark Clark’s side follow up last season’s double with another piece of silverware collected in emphatic fashion.

Azania Stewart was MVP with 20 points on 9-of-9 shooting, six rebounds and two blocks with Jo Leedham-Warner adding 11 points, 11 rebounds and five assists.

Stewart set the tone with the first four points for the Lions as it quickly became apparent just how difficult it was going to be for Newcastle to put points on the board at the other end. Jo Leedham-Warner hit the first three of the game with Cassie Breen and Shanice Beckford-Norton following suit out of a timeout to stretch the lead into double figures.

Jessica Eadsforth-Yates hit from beyond the arc to offer brief respite, but back came the Lions with Breen in the corner on the next possession to make it 18-8 at the end of the first having already laid down their marker.

The London barrage from beyond the arc continued in the second as Winterburn and Breen sparked a 10-2 start as the gap widened. Another rained down from Winterburn with the Lions keeping things tight with their stifling defence to take a 39-18 cushion into the break.

London had 13 assists in the first half, whilst forcing the same amount of Newcastle turnovers. They also netted eight three-pointers, whilst Newcastle were held to 7-of-27 shooting overall from the field.

There was no let up as play resumed with Kennedy Leonard adding two more triples to the tally in amongst an 11-0 run to make it 52-20. Maddy McVicar stopped the rot with another crafty move and Fernandez scored back-to-back baskets with the score narrowly reduced at the end of the third.

Eadsforth-Yates and McVicar struck from beyond the arc in the fourth as Newcastle threatened a fightback, but London turned on the style as Leah McDerment joined in on the action from downtown as the gap was extended to 44 points with 5:43 remaining.

The Lions maintained their dominance until the buzzer with the result long a forgone conclusion.