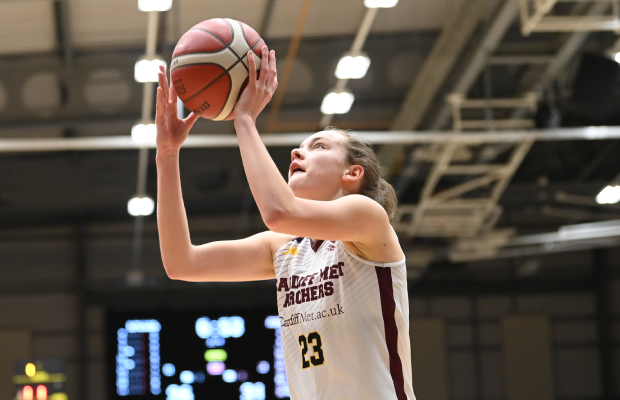 Issy Bunyan is set to become the first Welsh player to compete in the Under-19 Women’s game at the Hoopsfix All-Star Classic, on Saturday.

There were others in contention, too, with the emerging talents of Carys Roy and Maisie Harrhy – who heads to PSA with Ines Goryanova next season – pushing for spots on the final roster, while Panos Karras competes in the Under-19 Men’s game.

Bunyan has competed for both Wales and GB at FIBA U16 European Championships with the 2004-born prospect looking forward to representing her nation in London.

“I am really proud to be able to represent Wales at the game,” she told Hoopsfix. “There are other young talents in Wales and Roy had an outstanding season in [WNBL] Division 1 this season.

“Initially, I was gobsmacked and really surprised to be selected and then I was just super excited for the game day to arrive.”

Bunyan competed at both WBBL and WNBL D1 level this season with Cardiff Met Archers and hit double figures for the first time in the top-flight against Caledonia Pride in April.

It was a tough season for Cardiff – also facing difficulties in the midst of the pandemic – with both teams failing to make the league playoffs, though Bunyan believes the experiences have still been beneficial to her development.

“It has had its challenges which I believe have only helped me improve as a player and a person,” said Bunyan.

“Playing with the top players around is an honour and forces you to work hard and play at the best you can.

“I still have so much to learn and playing with these women is helping me so much.

“We had a rough year in WNBL which has taught me a lot with learning how to bounce back after tough games and sticking by your team to help each other through.

“We are committed to coming out stronger next season.”

Bunyan has the chance to impress in the second edition of the Under-19 Women’s game with the opportunity to come up against and reunite with fellow former GB Under-16 internationals.

The versatile forward is excited about the current state of the female game across the UK as it continues to grow with the next generation making themselves known.

“I believe that women’s basketball in the UK is improving rapidly at the moment and it’s really nice to see,” she said. “It feels good to have female role models which I can look up to and play against and with at the same time.

“Playing the game this weekend means a lot to me as it gives me the opportunity to play with the best players in the country who I admire.

“I am massively excited about playing with these talented players from across the UK as well playing with and against some old teammates.”

The Under-19 Women’s game is set to tip-off at 12:30pm on Saturday with the event live streamed at hoopsfixallstarclassic.com.