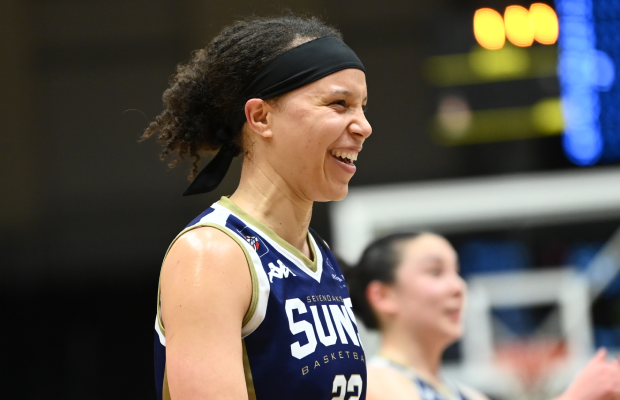 Cat Carr has become the first player to claim the WBBL’s Player of the Season award for a second time.

The Sevenoaks Suns star topped the voting from coaches around the league having also been the MVP for the 2017-18 season.

Carr had another impressive year to lead her side to a third straight league title with just one defeat during the Regular Season.

The ever-present in the WBBL averaged 18.8 points, 8.8 rebounds and 7.2 assists in the league to rank amongst the top 10 in each category.

Carr recorded two triple-doubles in a 12-game stretch in April as the Suns made up ground in a busy schedule to add to their collection of silverware.

Only once was Carr held to single figures in scoring in 20 league games, whilst netting a personal best of 29 points against Essex Rebels in March – one of 10 games with at least 20 points.

Carr received seven of the 10 first-place votes with London Lions’ Kennedy Leonard second in the official voting, though was named Player of the Year by the media in the annual BJA awards.